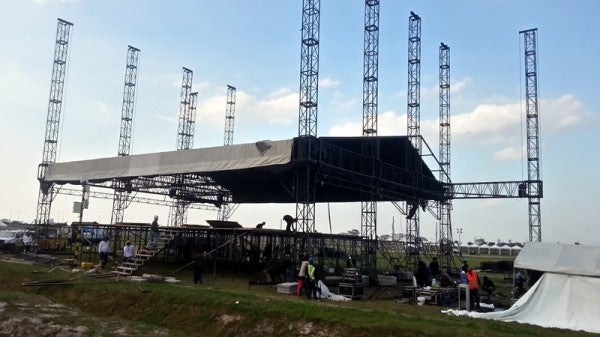 CLARK FREEPORT ZONE, Philippines—The Global Gateway Logistics City is a sprawling open ground expected to be teeming with thousands of revelers Saturday. At noon, the two-day 7107 International Music Festival being held here kicked off to an assembly that might be considered sparse—for an event area of about 28 hectares (including parking sections).

Organizers were taking it easy while they could, knowing that the real test would be on Sunday, when the iconic American band Red Hot Chili Peppers (RHCP) descends on the site to set the stage ablaze.

Speaking of which, producer Mike Pio Roda told the Inquirer Friday night, “We’re expecting an early surge of people fighting for the best spots near the stage…die-hard Chili Pepper fans upfront. Last time I checked, we had sold about 80 percent of the tickets.”

RHCP, a funk-rock group, has won seven Grammys and is one of the best-selling bands of all time (80 million records worldwide). Famous for the monster hits “Under the Bridge,” “Scar Tissue” and “Californication,” the Chili Peppers will close 7107 Sunday night with a 90-minute set. Grammy-nominated hip-hop star Kendrick Lamar will take the stage earlier.

On Friday, RHCP bassist Michael “Flea” Balzary and drummer Chad Smith announced their arrival in the Philippines via the social networking site Twitter. “Manila Manila We’re here here !!,” Smith tweeted. Balzary’s post read: “hi manila! What’s the greatest thing here to go do right now at 130? to eat? where do i go? what do i do? philippine me!”

The 7107 fest, touted as the country’s answer to the annual Coachella Valley Music and Arts Festival in California, has attracted mostly affluent-looking teenagers and twentysomethings, looking chic and comfortable in denim cutoffs and tank tops.

Not a few foreigners sat on mats, basking in the sun as they enjoyed the music. “We have a lot of people from Singapore, California, and a handful from Europe and Australia,” Roda said.

Framed by an arc symbolic of the sun, the main stage featured 13 acts; the smaller and more austere second stage served as stomping ground for 15 artists from noon till midnight. Among the performers were The Asteroids Galaxy Tour, Alvaro, The Charmes, Run Manila, Taken by Cars, Kjwan, Kid Ink and the main act, DJ-producer Kaskake.

On Sunday, aside from RHCP and Kendrick Lamar, the big names expected include local acts Itchyworms, Rocksteddy, Up Dharma Down, Abra and Loonie, Radioactive Sago Project, Sponge Cola, and foreign bands including  Red Jumpsuit Apparatus and Empire of the Sun.

Hard-hitting American rapper Kid Ink, who was featured on Saturday, is looking forward to watching the Philippine talents. He said in an interview, “It’s my first time here, and it’s been crazy good so far. It was surprising to know that we had fans on this side of the world.”

In a previous interview, executive producer Conchitina Herrera said she envisioned 7107 to become an annual “global music platform [for] the best of the Philippines.”

To help mount the outdoor event and create “full festival experience,”  the organizers hired a management team from Los Angeles, Ca., who had worked for high-profile music events such as Coachella, Ultra Music Festival Miami, and Electric Daisy Carnival (US, Puerto Rico and UK).

That experience, exactly, is what 7107 has vowed to deliver this weekend.

Read Next
The sum of his parts
EDITORS' PICK
Proposed Maharlika Fund would no longer include SSS, GSIS fund — Quimbo | #INQToday
The Best Tech Gifts For The 2022 Holidays
Shop smarter with vivo’s big 12.12 holiday deals
House energy committee chair Arroyo bats for cheap electricity
Philippine unemployment rate eased to 4.5% in Oct
Inflation, now 8%, deepens insufficiency of current wages
MOST READ
Can rocket materials be used to stop volcanic eruptions? Solon asks DOST chief
CA confirms appointments of 3 Cabinet officials
Ateneo knocks out Adamson to set up UAAP Finals rematch vs UP
Even without SSS, GSIS funds in Maharlika Fund, public must be vigilant — Castro
Don't miss out on the latest news and information.