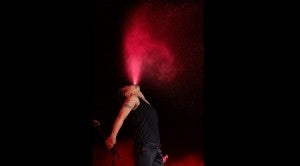 A man of theatrics, Marc Abaya spews a spray of water during
Kjwan’s performance on the first day of the 7017 International Music Festival at Global Gateway Logistics City in Clark, Pampanga. JILSON SECKLER TIU/Philippine Daily Inquirer

PAMPANGA, Philippines – Kjwan sent out their “Invitation” and the crowd responded.

The alternative Filipino rock band brought the house down and drew the largest crowd of a local performer on the first day of the 7107 International Music Festival at the Global Gateway Logistics City in Clark, Pampanga.

Frontman Marc Abaya ushered in the performance with their hit single
“Invitation,” which won the Ikon Asean regional music awards’ grand finals in Malaysia in 2007, to a raucous crowd of differing ages and races.

“To all the people here, thank you” Abaya said during their performance, the penultimate Filipino act, at the second stage of the music festival.

In between shots and cans of beer, and sticks of cigarettes, Abaya and Kjwan energized the crowd that gathered at the smaller second stage.

For the final performance, Abaya invited Audry Dionisio of General Luna and Enzo Marcos of Severo to play one of their first singles, “Lihim.”
RELATED STORIES