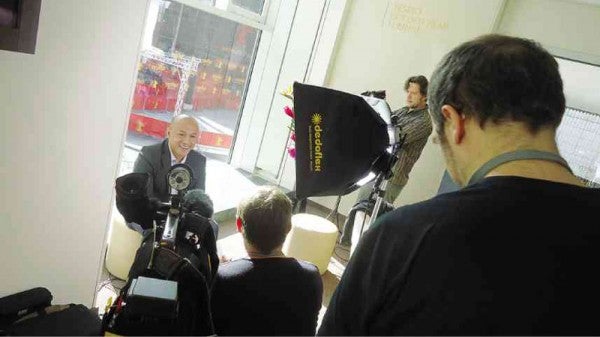 JAY ALTAREJOS (left) takes in an interview with a foreign journalist in Berlin.

Filipino filmmaker Joselito “Jay” Altarejos hailed his Berlin experience as “exhilarating and heartwarming,” despite the freezing weather in Germany.

“Sandino and Mark are first-timers in the movies so it was very exciting for them. The great thing about premiering in Berlin is the audience … being around film enthusiasts. Germany has such a rich film culture,” Altarejos told the Inquirer in an email sent from Europe.

“Unfriend” is included in the Panorama section, along with another Filipino film, Eduardo Roy Jr.’s “Quick Change.” The Panorama section is comprised of art-house and indie films that tackle controversial topics, mainly issues that concern the gay, lesbian and transgender communities.

“All the filmmakers in the Panorama section have lunch together,” he related. “It was wonderful to meet colleagues from all over the world. We had great conversations over wine. I hope to keep in touch with them even after the festival.”

“I didn’t expect how nice Germans were. Everyone is treated equally here,” he said.

Altarejos had one-on-one interviews with members of the international press at the Berlin fest.

“It was amazing. Alexandra Hudson of (the wire service) Reuters told me that she couldn’t stop thinking about the film after the premiere. She said it was powerful and disturbing, that it had a fresh take on mental health and the dangers of social media.”

“Unfriend” was inspired by the true-life murder/suicide of gay teen lovers in a mall, an incident that was captured by bystanders’ cell phone cameras. The video eventually went viral.

Altarejos felt compelled to make a film on the tragedy.

“The challenge is not to sensationalize it. It takes guts to tell this story,” he admitted. “The subject is considered taboo by some. It’s the story of underaged lovers who happen to be gay. Also, suicide makes people feel uncomfortable.”

He denounced the “stigma attached to mental-health issues.”

“Filipinos rarely go to psychologists to get treated for depression. This is why I had to put my foot down. I had to tell this story,” he asserted.

He described the story as “very personal.”

“I am proud to have this movie in my filmography. Love it or hate it, I am glad I did it. I’ve always wanted to tackle this subject. I hope Filipinos will realize that depression can be treated. We don’t have to lose a loved one to suicide.”

Like the lead character, Altarejos grew up with a mother who is an overseas worker. The irony is not lost on him: Filipinos go abroad for families they unwittingly end up neglecting.

“Unfriend” is as deeply felt as his 2010 Cinemalaya film “Pink Halo-Halo,” which is about his youth and the death of his father, a soldier.

This year, he is once again a part of Cinemalaya’s Directors’ Showcase section, with his new project “Kasal.”

He summed up “Kasal” as “a more mature take on gay relationships … how commitment is tested as gay lovers navigate the private and public spheres.” The filmmaker is “excited” because “Kasal” is “lighter” than previous works.

He lauded Cinemalaya’s contributions to the indie scene. “Cinemalaya is giving options to young and old Filipinos … It makes me proud that people can now watch different indie films where the real star is the story. Mainstream movies like ‘Spider-Man’ are great for entertainment, but indies aren’t that bad an option either.”

On other projects, he said that he hopes to get Marian Rivera for his Regal movie “One Great Love.”

Altarejos expressed similar optimism for “Unfriend.” “I hope it will get picked up by other film fests as well.”

“Unfriend” will open in local theaters on Feb. 26.