MANILA, Philippines – Colleagues in show business who have worked with the late Roy Alvarez remember him to be a “cool and calm” person, a “good friend”, with “animal sex appeal” and who was “passionate” about his craft. 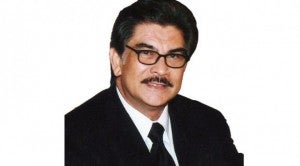 Alvarez passed away of cardiac arrest on Tuesday night. He was 63.

Filmmaker Elwood Perez, who directed Alvarez in 1985’s “Alexandra” and 1993’s “Dolora X,” recalled his first meeting with Alvarez: “In 1984, my casting director RayMaliuanag presented Roy to me. Roy had just flown in from a long stay in the United States. Never mind his acting credentials which were enormous, but what struck me most was the scent of English leather wafting from his gorgeous body. He had terrific, animal sex appeal.”
His current GMA 7 show is “Villa Quintana.”

He also appeared in Kapuso primetime shows like “Amaya” and “My Husband’s Lover.”

Singer-actress Ayen Munji-Laurel, who shared the screen with Alvarez in “Amaya,” told the Philippine Daily Inquirer: “He was such a cool and calm person. I fondly remember my conversations with him because he loved theater as well. His passion for his craft was admirable. I will miss him.”

Actor-director Albert Martinez, who acted with Alvarez in Tikoy Aguiliz’s “Rizal sa Dapitan” (1997), agreed: “I consider him a good friend. I enjoyed all his stories about aliens, the CIA, Mount Banahaw, and the unseen world of taong lupa (elementals and nature spirits). Beyond those out-of-this-world tales, he was such a good soul. A gentleman. A caring person. A good actor with his own unique style.”

Filmmaker Ato Bautista, who directed Alvarez in the indie film “Di Natatapos ang Gabi,” related: “In the short time we spent together on the set, Roy made quite an impression as a simple man. He was a collaborative actor. I felt his generosity and sincerity. He was very supportive.”

‘They are making up stories’: Cayetano camp denies insulting Velasco before Duterte