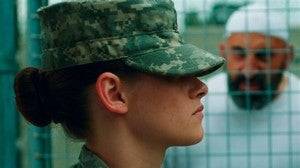 This photo provided by the Sundance Institute shows Kristen Stewart in a scene from the film, “Camp X-Ray.” The movies that populate independent film festivals continue to elicit lead actors hoping to foster career shifts. Robert Redford’s Sundance, kicking off it’s 30th year on Thursday, Jan. 16, 2014, in Park City, Utah, continues to attract the crux of the film business. As actors Stewart and Joseph Gordon-Levitt have learned, the indie fest is the ideal place to cast a new net. AP

ANOTHER SOMALI PIRATE DRAMA: Filmmakers behind “Fishing Without Nets” say there’s room for another Somali pirate movie in the wake of Oscar-nominated “Captain Phillips” — this time told from the perspective of the pirates.

Shot in Kenya using Somali actors speaking their native language, the subtitled drama premiered at the Sundance Film Festival on Friday night. It tracks a fisherman who resorts to piracy in order to feed his family and finds himself — at least initially — successful in hijacking a French oil tanker and taking hostages.

Director Cutter Hodierne said he became fascinated with the subject reading news articles when modern piracy was at its peak in 2008 and 2009.

“There’s so many angles to this but what I care about is … why would they do that,” Hodierne told the premiere audience.

He traveled to Kenya to meet with Somalis and developed a short film by the same title that won the top jury prize at Sundance two years ago — when the Tom Hanks-starring “Phillips” was already in development at Sony.

Media company VICE financed his feature, which expanded on the short’s storyline with the lead pirate bonding with one of the hostages. Hodierne set up individual scenes for his actors, but then let them come up with dialogue. He said he didn’t know what was actually said until he had translators view his footage back in New York.

And as for “Captain Phillips,” mentioned in the first two questions from audience members after the premiere: “The fact that there’s several films that tackle different angles I think is just a sign of how meaty the material is. You could probably make six or seven films about (modern piracy),” Hodierne said.

FITNESS NEVER STOPS: Devotees of the spin phenomenon Soul Cycle are known to be particularly obsessive about the classes. So it’s no surprise that despite a packed schedule of movies and other events, Soul Cycle had a near packed house as it set up shop at the Sundance Film Festival.

Soul Cycle, with locations in New York City and Los Angeles, shipped its signature bikes to Park City for its first pop-up studio. There were just a few empty seats at its first class on Friday, as people shed parkas for spandex as they participated in one of the intense workout sessions.

Land said Soul Cycle decided to offer classes during the busy festival because they kept hearing that there was “nothing to do” in terms of exercise (though there is plenty of skiing or snowboarding for winter sports enthusiasts).

Land admits one drawback: At the pop-up studio, there are no showers to get clean again after such an intense workout. But, she had a ready solution for other reasons not to go that some may offer: They provide workout clothes, sneakers, and a bag to put dirty clothes in. Healthy vegetable and fruit juices were being served afterward, courtesy of the kitchen appliance maker Bella.

Soul Cycle’s studio will be running classes throughout the weekend.

Wayne Newton hit the Sundance strip on Friday. It was the entertainer’s first time at the film festival, though Las Vegas is just a car ride away from Park City.

“In all the years I’ve been so close, but I was never able to get here because I was always working,” he said as he made the rounds at the Eddie Bauer Adventure House, which offered rock climbing as well as clothes for celebs.

Newton said he came to the festival to see Rory Kennedy’s documentary “Last Days of Vietnam,” but as of that afternoon, hadn’t seen anything — at least not on film.

“I’ve been watching people put on their skis and then get in a gurney and head to the hospital,” he joked.

BLINK AND YOU’LL MISS IT: The red carpets at the Sundance Film Festival are surprisingly quick compared to premieres in New York and Los Angeles. The talent arrives, poses quickly for photos and then moves down the interview line to talk to the press. The whole thing is done in usually half the time that it takes in the entertainment capitals. One reason for the speed and efficiency is because of the packed schedule with screenings after screenings at each location, there’s quick turnover.