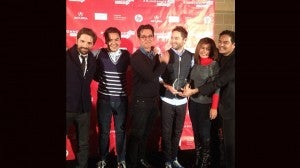 “Metro Manila” was shot entirely in the Philippines and features a cast of Filipinos.

The news was relayed to the Philippine Daily Inquirer by Filipino actor John Arcilla, who attended the event with costars Jake Macapagal, JM Rodriguez and Ana Abad Santos.

Ellis, an Oscar and Bafta (British Academy of Film and Television Arts)—nominated short filmmaker, invited the cast and crew onstage when he accepted the trophy.

“I’m so glad this film connected with everyone,” said Ellis in his acceptance speech.

Abad Santos told the Inquirer the triumph was “unexpected.”

“It’s amazing. All our screenings were packed and tickets were sold out,” said Arcilla.

The stars said they were “overwhelmed. We didn’t think it could happen. We were chosen by the people.”

Founded by Robert Redford, the annual festival aims to nurture independent filmmakers who might otherwise be eclipsed by the major studios while Hollywood uses it to scout new talent.

This year’s event presented 119 feature films from 32 countries, including 51 first-timers.

“Fruitvale,” a film about a notorious United States police shooting of an unarmed black man, won top prize at the festival on Saturday, while movies from Russia and South Korea were among non-US honorees.

The movie by first-time director Ryan Coogler won the US Drama Grand Jury award, as well as the US Drama Audience Award.

The makers of a film about Russia’s Pussy Riot feminist rock group, which took a Special Jury Prize, used their acceptance speech to hail the cause and rally support for its three members jailed in Moscow last year.

“Fruitvale”—named after the San Francisco Bay-area neighborhood where the action takes place—tells the real-life story of Oscar Grant, shot dead by police in the early hours of New Year’s Day 2009.

The film’s costars include Octavia Spencer, who won Best Supporting Actress Oscar last year for her role in the civil rights drama “The Help.”

The Grand Jury Prize for a US Documentary went to “Blood Brother,” an American’s work on behalf of an AIDS-afflicted community in India. It also took the Audience Award for US Documentary. With an AFP report