Indie filmmaker Vincent Sandoval described 2013 as annus mirabilis (a wonderful year), considering the harvest of international awards (last count, 28) by Filipino artists. On the other side of Show Town, the biggest events made up what could be described only with the opposite Latin phrase, annus horribilis. Horrible year.

Hopefully, 2014 would be different. Here’s to less scandals and more rightful reasons to celebrate. 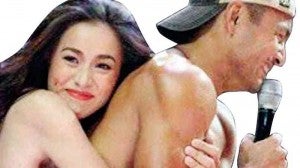 Meanwhile, if only because it’s fun, let’s look back on some stars’ quotable quotes, which made the past 12 months quite amusing.

Earlier, instead of tackling Claudine’s verbal attacks as they were hurled his way, Raymart dismissed them in one fell swoop: “May kakayahan siyang gumawa ng kuwento. (She has the capacity to make up stories.)”

Following are more quips that sparked the skies above Tinseltown.

Singer-actress Nikki Gil remained optimistic when asked about moving on after splitting up with singer-host Billy Crawford, her boyfriend of five years, because, she said, “Being bitter makes you ugly.” 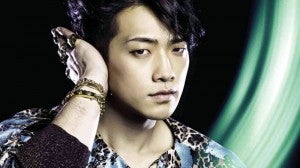 Silence of the lambs

Actress Jennylyn Mercado and TV host Luis Manzano broke up in November and, after relentlessly gabbing about their relationship for two years, suddenly clammed up. 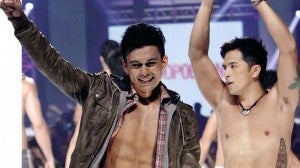 Football player Phil Younghusband deserves an award for issuing a statement that said next to nothing, in announcing his separation from actress Angel Locsin.

Said the statement released in October: “It is a sensitive matter… Neither of us regret the time we spent together, we enjoyed each other’s company and really made the most out of what we had…It was not an issue of who did what or…something. It was a mutual decision and, although it was difficult, we just felt that this would be the best thing to do, given our circumstances.”

What a waste of space.

In a subsequent Inquirer interview, Angel said of their two-year affair: “After what happened to us, I should already be…a love expert, but honestly I’m not…Phil is a good person. We didn’t end our relationship as a result of a big fight. He will always be special to me.”

Which led us to conclude that 1) the mutual decision was not theirs to begin with; 2) an interference, not a misunderstanding, caused it, and 3) the most telling words in this whole scenario were Phil’s: “given our circumstances.” They’re both single! Who could so strongly want them apart?

Also in November, actress Cristine Reyes was nothing less than a chatterbox about her one-month (!) affair with actor Derek Ramsay. Then again, she was promoting a project at the time, and so was Derek. Hmm.

Cristine related, “People said we looked good together, so we tried to be together. But we’re…better off as friends.” In a press con for a TV show, Derek recounted: “No one did anything wrong or bad. It just happened.” Cristine concurred: “It was funny…after we broke up we went out for drinks.”

No need to explain; it’s just us. 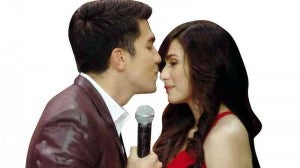 Speaking of trials: We witnessed a few legal tussles involving bickering couples. One of the most combustible top-billed Sunshine Cruz and Cesar Montano, who were married 13 years ago.

In an Inquirer interview, Sunshine clarified why she took Cesar to court in August, alleging marital rape among other misdeeds: “I had no choice because Cesar tried to hide the kids from me for days. When I fetched them, they weren’t allowed out of the house to see me…I know Cesar did that to force me to return to him. He asked me to give him a month to prove that he had changed, but I said,  ‘Friends na lang tayo.’ I wish him well. After all, he is the father of my daughters.”

Cesar, asked what piece of advice he would give his three daughters, told the Inquirer: “I will tell them to remember what I have been advising them since Day One—that I expect them to be righteous in every decision they make, especially when it comes to choice of partners, and also in love matters.” 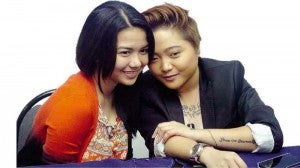 This dissolution was swifter by comparison.

Comedienne Ai-Ai de las Alas’ marriage to businessman Jed Salang went pfft after only a month. They were married in Las Vegas in April; by May, she was weeping and wailing on TV. Allegations of abuse flew fast and furiously.

Said Ai-Ai: “Hinagis niya ako sa kama, may sampalan, ’yung huli kinaladkad pa niya ako sa sahig! (He tossed me onto the bed, there was slapping. Most recently, he dragged me across the floor!)”

Jed countered with a “contempt of court” threat. 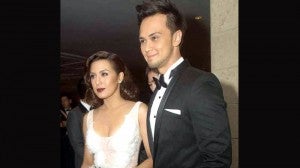 A meltdown on national TV? Was anyone surprised?

In March, cyberspace was polarized as netizens weighed in.

For Team Kris, Joy Lynn MNLFoodcritic pointed out: “Kris may be annoying and tactless sometimes but I think she’s telling the truth.”

For Team James, EdgarEdgar noted: “James is a man of few words, barely articulate on and off the court. But when he shed a few tears…(the) nation sympathized with him.”

Mother of all trials

But the mother of all trials could well be the ongoing legal battle between Raymart and Claudine—especially since her mom Inday and sisters Gretchen and Marjorie have joined the fray.

In her recent court appearance as witness for Raymart, Gretchen spewed a mouthful: “My wish is for (Claudine) to get the treatment that she needs…At sana matapos ang mga kaso niya. Dahil right now…she has nine cases.”

Almost every day, Claudine goes to court, Gretchen said. “That’s very tiring and stressful. It’s not healthy for her and for her children.” Gretchen insisted that she appeared in court only because “I love (Claudine) with all my heart.”

File under TL, for Tough Love.

Thanks  for the memes

Another public breakdown, this one starring actress Anne Curtis, sparked a series of memes (visual parodies) in cyberspace last month.

After one drink too many, Anne reportedly figured in a bar brawl, haranguing fellow revelers, “I can buy you, your friends and this club.”

On Twitter, Anne apologized: ““I’m sorry if I let any of my fans down…I’m just like any other person [who] makes mistakes in life.”

Heaven forbid that anyone make a mistake in death! 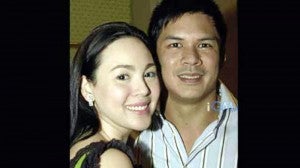 GMA 7 news exec Jessica Soho found herself on the other side of the fence and became a newsmaker as a result of the “gang rape” joke cracked by ABS-CBN comic Vice Ganda in his concert last May.

Soho released a statement that read, in part: “Rape is not a joke and should never be material for a comedy concert…But this should not be about me but about rape victims who suffer tremendously from this terrible crime.”

(What was it about that month?)

Cooper’s retort: “I urge her to go there (Tacloban). I’m sure she has the means, as she’s the wife of the Interior Secretary. Her husband’s a politician. I’m sure he can arrange her a flight.”

Irony of the year

For portraying a gay man in the GMA 7 soap “My Husband’s Lover,” actor Tom Rodriguez became the hottest hunk in local show biz.

In one of the Inquirer’s multiplatform interviews last year, Tom showed that he deserved the spotlight: “I relate to people on the basis of their attitude and behavior. If a person is a liar, that for me is a bigger no-no than being gay.”

Since coming out of the closet in June, singer Charice has been hogging the headlines.

In another Inquirer multiplatform interview, Charice revealed the reason for her admission: “I didn’t think I could go back to work…unless I revealed who I was. Every day was a struggle. I was hurt by the speculations and criticisms. Some were true, but most…were too much for me to handle.”

In July, Charice topped a list of the hottest lesbians in the world drafted by the website Autostraddle.

Another against-all-odds newsmaker was 60-year-old singer Freddie Aguilar, who took up with a 16-year-old girl.

They eventually converted to Islam and got married in Muslim rites in November.

In an Inquirer interview, Ka Freddie remained undaunted by criticism: “Only God can hurt…me. No human can degrade Freddie Aguilar! Who are these people? We are all sinners! Hello?”

As coup de grace, he asserted that he would fight for his underage love: “Kahit magkapitpitan pa ng y—–s! (Even if my b—s get crushed!)”

SEOUL—South Korean singer Rain, known as the “King of K-Pop,” has released his first album in four years as part of a long-awaited comeback after mandatory military service. Rain, 31, whose real name is Jung Ji-Hoon, released online his sixth album entitled “Rain Effect” as well as music videos for its double title numbers “30sexy” and “La Song.” He finished 21 months of military service—mandatory for all able-bodied South Korean men—in July last year.

Rain is set to make a Hollywood comeback, costarring with Jason Patric, John Cusack and Bruce Willis in “The Prince.” AFP

The top show biz news in the Inquirer tabloid Bandera (and why we are moved, if we are moved.)

Kris Aquino babayaran ng bilyones, lumipat lang sa TV5. (Who is paying for her to move?)