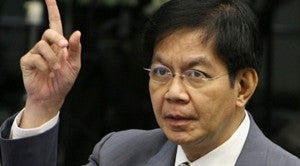 But Lacson said that while the film had some “similarities” to the incidents in his going on the lam in 2010, it was basically fictional.

“It’s fictional but inspired by that chapter in my life story when I was in hiding. I got paid for the film rights though,” Lacson said in an interview.

“Yes, I had a say in the choice of director and lead actor, at least. Also, I collaborated with the director, Ms. Joyce Bernal,” Lacson said.

He said the film’s producers— friends of one of his sons—had approached him to make a film out of his experience.

To this day, Lacson has not disclosed where he went into hiding or who helped him elude arrest for his alleged involvement in the 2000 murders of public relations agent Bubby Dacer and his driver, Emmanuel Corbito. Lacson was cleared of the charges, enabling him to return a year later.

He said he would reserved the true details and accounts of that experience for a book he was writing but had put in the back burner because of his appointment as overseer of the rehabilitation of the communities in the Visayas that were ravaged by Supertyphoon “Yolanda.”

Lacson and his family were expected last night to watch “10,000 Hours.”

“I want to satisfy myself that the movie is deserving of the 14 out of 19 awards it got last night,” he said, referring to film’s running away with most of the awards at this year’s Metro Manila Film Festival.

Read Next
Time for selflessness and compassion
EDITORS' PICK
How not to retire as an ex-president
Shop smarter with vivo’s big 12.12 holiday deals
Lawmakers eyeing more changes in Maharlika plan
House energy committee chair Arroyo bats for cheap electricity
The vivo Y02 is now available in the Philippines for only PHP 5,299
Hidilyn Diaz wins only gold missing from her collection
MOST READ
Jovit Baldivino, ‘Pilipinas Got Talent’ winner, dies at 29
LPA enters PAR, to likely strengthen into tropical depression in coming days – Pagasa
Andi Eigenmann, family in Manila for a quick visit; Ellie dines with grandma Jaclyn Jose
11 Filipino imports named to Japan B.League Asian All-Star team
Don't miss out on the latest news and information.