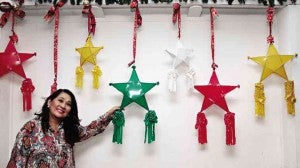 SHE SPRUCED up the garage with colorful ‘parol’ and boughs of holly. INQUIRER/GRIG MONTEGRANDE

MANILA, Philippines – Actress Tessie Tomas inexplicably shed tears when work was done on the heirloom home she bought and started restoring in June 2011. Designed by National Artist for Architecture Pablo Antonio, the two-story structure stands in a bustling neighborhood somewhere in Pasay City.

To cut down on costs, Tessie took a hands-on approach. “There were at least 10 workers here every day for three months,” she relates. “In the home stretch, I was supervising the workers every day.”

Six months later, during the blessing, Tessie found herself crying again, this time from sheer exhaustion.

“I would sometimes talk to the house as if it were a person. I felt so close to it,” she says. 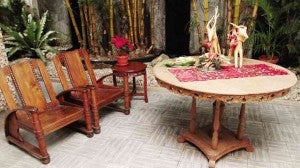 She took a break from show biz to devote all her creative energies to the restoration.

Since the man who designed the house was a pioneer in modern Philippine architecture, Tessie made sure not to tamper with the original design. “We didn’t change the tiles; we just cleaned them. Some friends thought the flooring was vinyl; actually, they are stone tiles.”

She was awed by the woodwork on the stairs, doors, beams—all narra. “Even if you stomp your feet on the floor or bang the doors, you won’t hear a thing,” she insists.

The house was the childhood home of a dear friend, who was  “pleased to see the outcome,” Tessie says. She adds that the house is a perfect modern home made for the tropics, “proof that a Filipino home can be comfortable even in this weather.”

“Everyone loves this window,” she quips. “I call it the opening salvo of the house.” 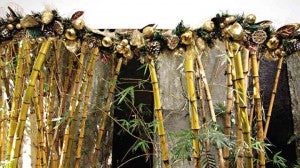 She planted bamboo trees in the back garden where manmade waterfalls exude the ambience of a meditation center or wellness spa. Friends have called this home “a refuge of stillness.”

She calls the faux falls her personal “murmuring brooks,” saying it was her son Robin’s idea to paint the walls of the falls black. This pocket garden is Tessies’ favorite spot. “I often have breakfast here.”

Another favorite spot is the dining area. “When you sit at either kabisera, you get a view of the front or back gardens,” she explains. 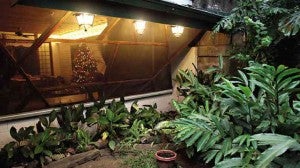 “I have very productive brainstorming sessions here with friends,” Tessie volunteers.  “My thoughts are more clear and focused here.” She believes it’s because she’s not distracted by TV sets or telephones, which she is in her Makati condo unit.

Makati is still her home base but her husband, marine biologist and musician Roger Pullin, knows she prefers to live in this restored house.

“When I’ve had enough of the hustle and bustle of Makati, I come here for a little solitude,” she says. And then, perhaps realizing the irony of her statement, she hastily adds, “It’s Pasay’s best-kept secret. Who knew that in the middle of the metropolis you could build a sanctuary such as this?”

When she has visitors, they invariably tell her that they feel they have been magically transported to Tagaytay. “It’s so serene. At night, with the lights and all, the house assumes a different character,” Tessie says. 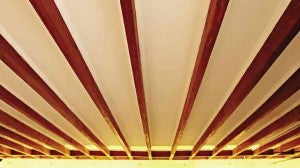 SHE CHOSE not to hide the narra beams. INQUIRER/GRIG MONTEGRANDE

A friend once asked, “Do you accept home restoration deals now?” Tessie was stumped: “They thought I was changing careers!”

Decorating for Christmas turned out to be a high-tech collaboration. She spruced up the place with the help of interior designer Ada de Leon.  Robin, a New York-based fashion designer, joined them via Skype.

Tessie and Ada rearranged the décor as Robin gave his comments. Robin noticed that the floor looked too cold and bare, Tessie recalls, and swiftly suggested a rug.

“Robin has a quick eye for details like that,” the proud mom says. She describes the Christmas tree as “DKNY-inspired,” because Robin took inspiration from couture luminary Donna Karan.

Faux blooms—cattleya, mums, orchids—adorn the tree, with red, red berries. Tessie got the flowers from a local mall. “Quite pricey,” she admits, “but from afar they look fresh.”

Though the overall theme is cosmopolitan, she made sure to put Pinoy touches here and there—for instance, capiz parols all over the place. 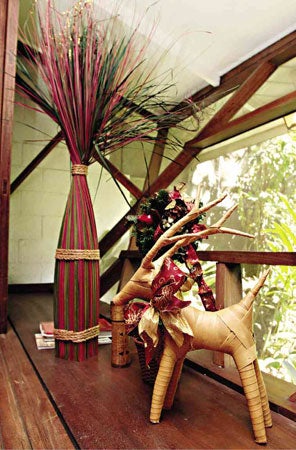 A source of pride is a quartet of reindeer crafted by Angono artist Perdigon Vocalan. Walis tingting table centerpieces are from Dapitan—like the prosperity tree that’s originally from Paete.

“I don’t go for matching décor pieces. I’d rather be unpredictable,” says Tessie, who abides by a simple philosophy: “Interior design is like fashion—it’s all a matter of personal taste. You don’t need expensive stuff. What’s important is that they go well with the house.”

She has one rule: “No gaudy, glittery, ornate pieces. I’m partial to the lived-in look. I don’t want my home to be like a museum, where guests are afraid to touch things or to sit on chairs. I don’t mind clutter, as long as people are comfortable.”

She and Ada like moving things around. “It’s a big place; we can do that all the time.”

Most of the furniture pieces are from the antique shops on Bangkal, Makati. “My suki (go-to shop) calls me when there are new finds,” she says.

It was Robin who stumbled upon the eight-seater narra dining table. “The chairs were in such a sad state, but they fixed up the solihiya (weaving).”

The wooden chest is a gift from Ada. All the paintings are by Robin.

The second level is Robin’s atelier. It was abuzz with activity recently, as seamstresses finished ball gowns meant for the launch of his online store (tomasnyc.com) at the Vogt Gallery in New York last month.

On her last birthday, Tessie had a lechon/barbecue party here. Her big dream is to throw a reggae-theme bash, complete with a live band, in the garden. “Maybe on Valentine’s Day,” she says. She had a pre-Christmas party before leaving for the United Kingdom for the holidays. 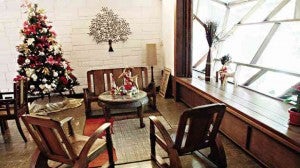 THEY broke up the sala set and laid a rug on the floor. INQUIRER / GRIG MONTEGRANDE

Christmases are usually frenetic affairs in the Pullin-Tomas household. “We spend it with the whole clan,” she says. “My mom has 14 siblings so I have lots of cousins.”

New Year’s Eve is usually more quiet and laid-back for the couple. “We often escape to a friend’s rest house in Anilao, Batangas, to avoid the noise and smoke from fireworks in the city,” she says.

When she gets back from the UK first week of January, she goes straight to work on a new GMA 7 soap, “Kambal na Sirena.” (She recently signed up with the Kapuso network.)

She is not fond of white Christmases. “It’s too cold in the UK, but I haven’t seen our grandchildren for so long,” she says. She misses the kids of Roger’s daughter Alice—9-year-old Tom and 6-year-old twins Ysabel and Hope Squires. 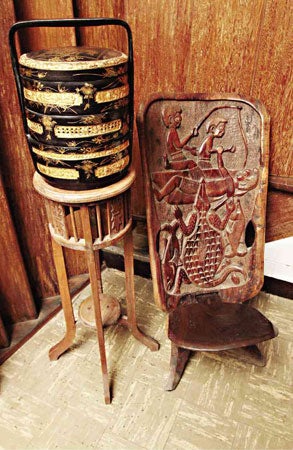 “The twins interviewed Roger (via Skype) about Tacloban: ‘May we know what is happening? Do the people now have food?’”

Before flying off, she organized a fundraiser for survivors of Supertyphoon “Yolanda.”

The show, “Operation: Bulig Kita,” was held at K-Pub BBQ in Bonifacio Global City on Dec. 8. “It was for the benefit of Katbalaoganon Foundation Inc., of which I’ve been president for over two decades.”

She considers Catbalogan her true home. “We’ve had scholarship programs and medical missions in the past. With our relief efforts, we’d like to show that we can transcend regionalism. Now is the time to help.”