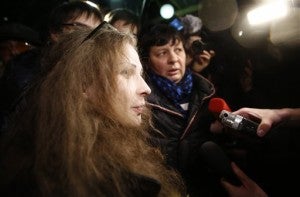 Nadezhda Tolokonnikova and Maria Alekhina were scheduled for release in March but were granted amnesty on Monday, that was seen as the Kremlin’s attempt to soothe criticism of Russia’s human rights record ahead of the Winter Olympics in Sochi in February.

The band’s third member, Yekaterina Samutsevich, was released on suspended sentence shortly after all three women were found guilty of hooliganism and sentenced to two years in prison in August 2012 for their protest at Christ the Savior Cathedral in Moscow.

Alekhina and Tolokonnikova told reporters on Tuesday they have got together to discuss a human rights project they want to set up together.

Pussy Riot women vow to fight on after release