Mark Wahlberg on being swarmed by Filipino women in Hong Kong 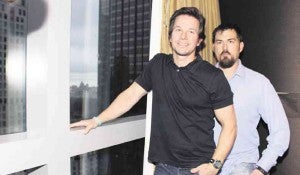 LOS ANGELES—So there was Mark Wahlberg quietly sitting in the back of a Catholic church one Sunday morning in Hong Kong, where he was filming the latest “Transformers” movie, when something unusual happened.

“We were shooting and finishing Transformers there,” Mark, a devout Catholic, began recounting his unique church experience. We were at the Mandarin Oriental Hotel in New York for this interview.

“I went to St. Joseph’s in Hong Kong. On the first week, I went to the 8 a.m. Mass. There were lines of people waiting to get into the church. I thought, wow, this is a special event or something. I waited till people went in.

“So I came in and I had the back row. I was sitting by myself and all of a sudden, all these women jumped in and started sitting beside me, squishing in and hanging off the side of the pew. I was like, ‘What’s going on here?’ Then I realized it was probably 98 percent women in the church. They were all Filipinos and they all knew that I knew Manny Pacquiao. I was like, I’m a hero now; I’m well-connected!

“The next week, I went to the 7 a.m. Mass and it was the same thing. Then I realized that a lot of people worked there and that’s their special day to hang out. I was really appreciative of the love that they gave me. It was a special experience.”

“Those masses were the highlights of my trip,” Mark added after we finished our interview.

Earlier in our chat, we congratulated the 42-year-old actor for getting his high school diploma this year, after completing online courses for the past year. “It’s a big weight lifted off my shoulders,” admitted the former “bad boy.” “It was one of the big regrets that I had, not finishing high school.”

“I had no idea how hard it would be,” Mark said about the courses he had to take while on movie sets or on planes. “I should have known, looking at my 5th grade daughter’s homework and not knowing how to answer all the questions, that it would be difficult. But it was something that I wanted to get done.

“Plus, I was partnered with Taco Bell and their ‘Graduate For Más Promise’ program which was originally ‘Graduate to Go.’ The fact that I wasn’t a graduate and I was telling all these kids how important it was to stay in school, I needed a little more credibility.”

“Certain things are very interesting,” said the father of four kids with his wife, Rhea. “Math is a different issue. I do have an accountant so I don’t spend too much time working on my own math.”

Over the years, Mark has completely shed his initial showbiz incarnation as rapper Marky Mark/Calvin Klein underwear model, thanks to good performances, including his Oscar- and Golden Globe-nominated turn in Martin Scorsese’s “The Departed.” In his latest film, the action-drama “Lone Survivor,” he shines again as Marcus Luttrell, the former Navy SEAL whose bestselling first-person memoir writer and director Peter Berg based his adaptation on.

Mark said that had someone told him 16 years ago that he’d be a good actor someday, he would have replied, “You have a good imagination. It’s probably not going to happen.”

The actor said that prayers and hard work got him to where he is today: “I get up and say, ‘Okay, Lord, give me the strength to be a better person, to know what I need to do, to go out there and walk the walk.’ Then I start like it’s the first day of my life and I have a lot of opportunity. But the only way I’m going to capitalize on it is by doing the work.”

He emphasized that “Lone Survivor” was truly a unique experience both physically and emotionally. The real-life tale also depicts how an Afghan villager, Mohammed Gulab (played by Ali Suliman) protected Marcus when the Taliban came to execute him.

“I talked for many years about different films and how hard I was training for ‘The Fighter,’ for example, and how much I sacrificed,” Mark said. “In making this movie, I realized what it was about and what we were all committing to do. It wasn’t about me anymore.”

His respect grew for the SEAL Team 10, and men who fight for their country. “So when I watched the movie with Marcus, I sat there crying at the end,” he revealed. (In a surprise, Marcus later showed up and joined Mark in the interview but we’ll feature him in another column.)

“I was thinking of what they went through and what they sacrificed on a daily basis. I’ve never been moved or inspired like that. Those guys are incredible. 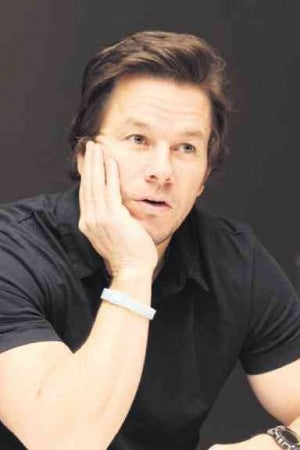 “OUR FILM is not about politics or glorifying war. It’s a tribute to soldiers and the Afghan people.” RUBEN V. NEPALES

“And this movie is a tribute to everybody who’s ever signed up or fought for their country anywhere. It’s an amazing act of bravery to sign up and risk your life to fight the evils in the world.”

He said there were unexpected blessings in bringing Marcus’ harrowing story to the screen. “But far more rewarding was to have the family members of the guys who never got off that mountain give you a hug and say, ‘Thank you for making a wonderful tribute to our family.’ People thanking me that it wasn’t about politics and glorifying war—it was just showing what these soldiers do, and it’s a tribute to the soldiers and the Afghan people.

“So for even Gulab hugging me and saying ‘thank you’ to me was pretty powerful. All the bumps and bruises, they all go away.”

He elaborated on getting hurt: “Pete (Berg) shot me in the face with a mortar from two feet and I wanted to kill him. He wasn’t trying to hurt me. We didn’t have all the bells and whistles to be hanging off cables and green screens and make pads look like rocks. We had real rocks. We just said, ‘Okay, we’re going to do it and we’re going to make it real.’ It feels very real and authentic.”

One of Mark’s other projects is “Wahlburgers,” a reality TV show set for next year, that takes a look at his chef brother Paul’s life as he expands his hamburger restaurant business. Mark, the executive producer, and singer-actor brother Donnie, will appear in the series. “My brother Paul, and my mom (Alma) are more the stars.

“But Donnie and I are involved. I wouldn’t work for 24 years to get some sort of credibility, only to throw it out the window for whatever they pay you on a reality show. We’re more of a documentary series about building a family business. I think people are going to find it very compelling. I know what we’re doing and what it’s about.

“A&E couldn’t be putting it on right behind ‘Duck Dynasty’ and doing it at all if they didn’t think it was something that is going to be really interesting. It’s a real business, and I would never put my name on this restaurant if I didn’t believe in my brother and his ability.”

Mark looked back with gratitude at his good fortune, quite a shift from his high school days when he was involved in drugs, theft and petty crimes. He is thankful to folks who lent a helping hand along the way.

“I’ve had to beg for help many times,” he said. “For second, third, fourth, fifth chances. If a number of people didn’t reach out or have a little bit more faith in me and extend that helping hand, I certainly wouldn’t be sitting here today. That’s why nowadays, I don’t really like asking for favors. Instead, I like doing things for people. Usually, when I do ask a favor, I promise that I will pay them back twice.”