Ateneans to the aid of typhoon victims 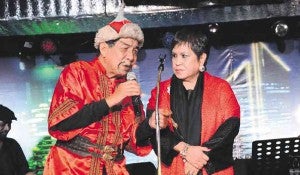 URBANO and his back-up singer for the evening, Lorna Kapunan

It’s not every day that you see grizzled news personalities like Richard Gordon and Lorna Kapunan letting their hair down and having a good time—at least not on television. But during “Atenean Night” held recently at RJ Bistro in Makati City, the Philippine Red Cross chair and the high-profile lawyer took a break from very hectic schedules to jam with fellow alumni in a night filled with laughter, booze and music.

Organized by musician-businessman Ramon “RJ” Jacinto, the event was a fundraiser for survivors of Supertyphoon “Yolanda,” 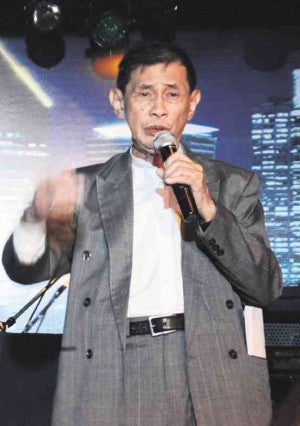 GARY Lising’s still got it—and he spared no one.

mounted with the Philippine Red Cross. Guests were urged to bring donations of old clothes, medicines and other goods. Jacinto later told the Inquirer that they raised close to P2 million.

Much to the crowd’s delight, PRC chair Gordon gamely took the mic to sing “La Bamba” and “The Long and Winding Road,” among others. Gordon cracked up the audience by teasing 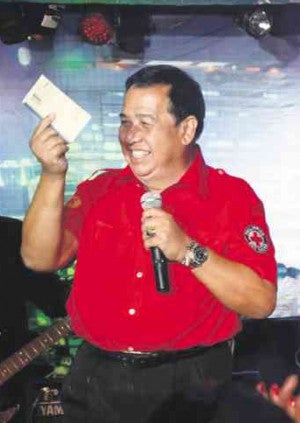 GORDON makes Gary Lising the butt of his jokes.

comedian Gary Lising about not donating anything. Lising retorted, “I donated all my underwear.” To which Gordon replied: “Ah sa ’yo ba ’yun? Ginawa naming rags!”

Jun “Mr. Shooli” Urbano plucked Kapunan from the crowd to be one of his three back-up singers in a light-hearted performance of The Platters’ “Remember When.” After her singing stint, Kapunan exited the stage, but not before quipping “Bitin! Gusto ko pa!”

Other Atenean artists who performed were Jimmy Bondoc, Karylle and Jose Mari Chan. Karylle was playful and sultry in a jazzed-up rendition of The Beatles’ “If I Fell.” Chan was joined onstage by sons Jose Antonio, Michael Philip and Francisco Rafael for a rendition of “Christmas Moments.” The indefatigable Chan then regaled the guests with choice tracks from his “Going Home to Christmas.” 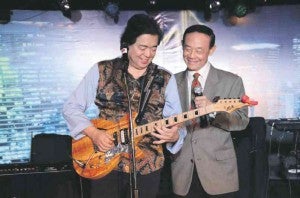 He likewise sang “Afterglow”—a track from the album “RJ Duets”—with Jacinto, who later dished out some good ol’ rock and roll and such classics as “Rock the Boat” and “Just a Gigolo.” The whole bistro sang along.

Between song sets, Lising and Urbano kept the energy high with a stand-up routine—mostly riotous green jokes—that kept Gordon and Jacinto in stitches. “We don’t know who those two are!” Gordon said, guffawing.

Lising poked fun at politicians and other figures embroiled in recent controversies. Not even former Chief Justice Renato Corona, 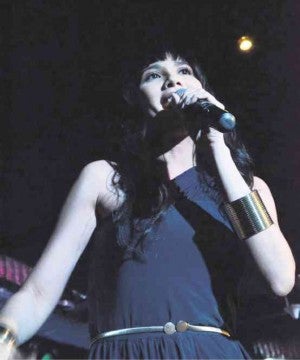 YOUNGER Atenean Karylle does her part.

who was present, was spared. “It is said that Corona is one of the best Chief Justices we’ve ever had. And now we acknowledge the man who uttered those words… Renato Corona,” Lising said to roaring approval.

Finally together onstage, Gordon, Jacinto, Urbano and Lising performed “I Saw Her Standing There,” and then continued to laugh and jam the night away.