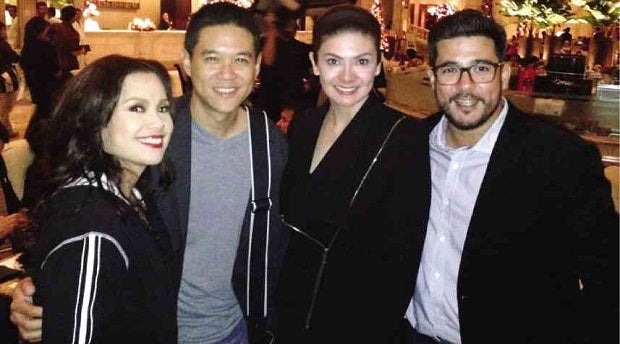 AFTER “Playlist,” with (from right) Aga and Charlene, and my husband Rob. FACEBOOK PHOTO

Did last weekend really happen? I don’t think I had done a concert before that went as seamlessly, perfectly, relaxed. It felt like a magical dream. I didn’t want those two nights to end… I’m sure all of us who were part of “Playlist” would have kept going if we had our way. We are experiencing a major hangover. It’s been almost a week after the fact, and we’re still… there!

The reason I marvel at what seems like an anomaly in this business is that, although on the surface things go according to plan, the truth is, many performers have been part of endeavors taking place in stressful circumstances. I’ve seen frustrated designers throw rolls of tape at technical managers… technical elements not installed on promised dates… crew members who can’t remember where props are supposed to go, despite constant repetition in rehearsal… people backstage running around like headless chickens, accomplishing nothing. Or less. 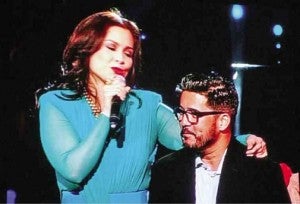 AFTER this most thrilling tease, that reunion movie had better happen. FACEBOOK PHOTO

Over the years, I’ve seen things that prove Murphy’s Law really does exist. As my many cryptic Facebook status updates indicate, s*** still happens, no matter what. The only thing we can do is to carry on with grace, patience, understanding, love, and many glasses of alcohol, hoping that the laws of karma will deal us a good hand the next time around. Well, “Playlist” was that hand. A royal flush. It really doesn’t get much better than that.

Despite our abbreviated rehearsal period (Gerard and I were in Shanghai until December 2nd; his first rehearsal with the orchestra was on the 3rd, and my two chances to get it right were on the 4th and 5th), it felt so calm. The orchestra never once played tentatively, everyone was accurate from start to finish. All the brand-new charts by our incredible arrangers (Gerard, Marvin Querido, JD Villanueva, Lynne Shankel and Ria Osorio) sounded amazing. We also pulled a couple of orchestrations by Ryan Cayabyab out of our treasure chest (including that of his “Rama Hari” gem “Magbalik Ka Na, Mahal”), and assigned the two guitar solos (“Blurred Lines” and “Sana Maulit Muli”) to genius guitarist Cezar Aguas.

Bobby Garcia had all the technical and stage elements—lighting by Butch Cruz, sound design by Bobbit Jacinto, projections by GA Fallarme and set design by Otto Hernandez—under control (I love it when these all come together). When he was in the OB van directing the TV coverage, his able assistant Jamie Wilson took care of things on the ground. And the entire production staff was in on the surprises that caught me off guard: On Dec. 6, Ai Ai de las Alas made an unscripted (and incredibly funny) appearance, the two of us dueting on Imelda Papin and Aegis jukebox favorites. On Dec. 7, Ogie Alcasid took his turn, coming to the stage from his seat in the audience. He was one of my special guests 10 years ago in my concert “Songs from Home,” so we reprised one of the duets we performed back then, a shortened medley of Pinoy rock hits by Sampaguita and Hotdog. Thank you, you guys!

However, the most nakakakilig appearance was by Aga Muhlach, who came up the stage (again, unplanned) and said a few words. He ended up staying there (the instructions on my teleprompter read: “Keep Aga on stage.” So I did), sitting on the stool as I sang “Sana Maulit Muli.” After that tease, this movie had better happen!

Costume fittings at the studios of our designers, Rajo Laurel and Inno Sotto, went smoothly. Rajo’s sleek black suits never fail to make me start a show on the right foot, and Inno’s elegant gowns made me feel like a 1940s movie star. John Lozano’s styling, makeup by Juan Sarte and hair by Kusie Ho completed my transformation. Thank you!

During the final run-through at Meralco Theater on Dec. 5, two of my friends made their own unscheduled stage turns, pinch-hitting for Rachelle Ann Go (who attended her rehearsal in the morning, but got some much needed rest in the afternoon). When Rachelle Ann’s part of the program came along, I called Carla Guevara to sing “For Good” with me, then asked Shiela Valderrama-Martinez to do “Part of Your World.” Finally, I had Carla (herself a former cast member of the West End production of “Miss Saigon”) sing “Movie in my Mind” with me. Ladies, you have no idea how huge a favor it was to us to have you sing that afternoon, and how thrilled I was to watch you both with that huge orchestra behind you. Thank you so much for that!

There are many things I’ll remember about “Playlist,” memories that will stay with me forever: Jamie’s sweet smile as I sang “I’ll Be Home for Christmas” (he would later tell me that he remembered his father singing it to his mother, causing a sweet kilig moment between the two); Jondee Livioco’s violin solo in “Sana Maulit Muli”; my mom, the producer of this concert, beaming with pride from her seat in the front row; seeing my daughter Nicole and Gerard’s daughter Carmen boogie to “Love Will Keep Us Together”; and witnessing my whole souvenir program staff (Tin, Jeff, Betsy and GA, with special guests Noel and Jhack) melt at the sight of Aga when he left his table to join ours at the lobby of The Peninsula.

It’s an amazing thing when an anniversary this special comes together so wonderfully, all the stars in perfect alignment. It makes me thankful for the 35 years that have passed, and hopeful for many more adventures in the next 35. For all of you who have been there through it all, thank you from the bottom of my heart.