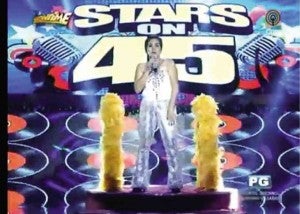 As the telecasting year draws to a close, we note a more competitive energy (if not frenzy) on noontime shows, especially in their efforts to “one-up” each other by way of the innovative regular game portions or talent and personality tilts that their respective brainstormers are able to think up.

The most successful of the lot, in our view, is “Eat Bulaga’s” “Pinoy Henyo” game, which has done so well in recent seasons that it’s “gone nationwide,” with teams coming in from different places to vie for the increasingly bigger prizes at stake.

Not to be outdone, “Showtime” has come up with the similarly popular “That’s My Tomboy” tilt for young lesbians, which has prompted the competition to wittily whip up “That’s My Tambay”!

The competitive bent has become so spirited that another new tilt has just been introduced on “Showtime”—a singing tilt, “Stars on 45,” for talents who are at least 45 years old!

We watched it last week and found it right up our viewing alley, because we have a soft spot for mature entertainers.

(In fact, we occasionally drop in on a karaoke stall in our neighborhood pang-masa mall to listen to their often exceptional practice sessions!)

Many totally unknown or “has-been” senior singers are better performers than their younger counterparts, so we’re glad that “The X Factor” and “The Voice” in the United States have given them the importance they deserve—and “Showtime” is now doing the same here by way of “For Oldtimers Only.”

A past edition indicates that the show is on to a good thing with its new regular feature. The first contestant was 51 years old, but he still looked relatively young and trim, and his vocal impression of Hajji Alejandro was convincing.

Aside from channeling a mature singing star’s style, the tilt encourages its contestants to mimic a younger performing luminary, so the contestant followed up with his own take on a song popularized by—Daniel Padilla!

The studio audience responded strongly to the more current tune and style, so its combination of “old” and “new” has proven to be an astute touch.

The second contestant turned out to possess an even better singing voice, and did full justice to a Mon del Rosario song, then followed up with a Bamboo number. He didn’t look as good as the first singer, but he was adjudged the day’s winner on account of his obviously superior musical skills.

If these two contenders were any indication of how the new tilt will fare in the coming days and weeks, its finals should be an exceptional “bravura” battle of some truly prodigious voices, all of them honed by years and even decades of “desperate” experience!