It’s not a game of “Truth or Dare” or an episode of “Fear Factor,” but these half-Filipino hunks want to prove that they can accomplish and enjoy uniquely Pinoy tasks: from selling buko juice and balut to pedaling a pedicab on busy city streets.

Collectively known as Island Media Asia (IMA), these hot hunks have posted a collection of 30 videos on their YouTube channel, which has earned a total of 615,714 views and attracted 6,307 subscribers after a year and four months.

They conceptualize, shoot and edit the videos on their own.

The IMA guys (Matthew Edwards, 21, and his brother Henry, 22; Daniel Marsh, 23; Charlie Sutcliffe, 24; Keys Cosido, 25; Brian Wilson, 25; and Michael McDonnell, 27) all grew up abroad. Shooting the videos was their way to fast-track their assimilation in the local culture, they explained.

(Michael is originally from Canada; Henry, Charlie, Keys, Brian and Matthew, from the United Kingdom; and Daniel, from Ireland.)

“We thought that making the videos was the best way to learn more about our moms’ home country,” said Daniel.

The buko video culled the most number of hits, with 107,914 views to date. Next is another street vendor video—this time, the boys hawked balut (fertilized duck egg), which garnered 78,234 views. Third most viewed is the pedicab video with 51,106.

They also pushed fishball carts and showered in public, beside the barangay poso. They tried planting rice with real farmers in Nueva Vizcaya, too.

But the buko video remains a favorite among viewers and the seven guys.

Charlie quipped, “I am the buko master. To think the bolo (machete) was quite blunt.”

“Each episode was challenging for us,” admitted Michael, who started these videos on a lark.

Making these videos allowed them to understand the everyday struggles of ordinary working men.

“We wanted to embrace the culture on the street level,” Daniel explained.

Henry pointed out: “We’ve realized how hardworking Filipinos are … they exert so much effort and earn so little.”

“Pedicab drivers only get paid P12 to P20 per passenger and I had five customers that day,” Daniel recounted.

“I only got three clients,” Charlie quipped.

After a whole day of selling fishballs for example, Daniel only earned P350. “Some customers didn’t want to pay up, saying: ‘You are rich; you are foreigners.’” (They turned over their earnings to the vendors and drivers.) 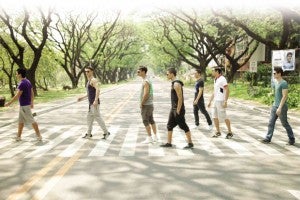 MEN ON the street: The Island Media Asia guys have learned to respect the hard work of ordinary Filipinos.

Charlie confessed: “I thought planting rice was easy, but it was backbreaking and difficult.”

Recently, they tackled the Pinoy fascination for basketball in video. They might not make it to the Gilas Pilipinas team, but these white boys demonstrated that they could jump and shoot hoops, while wearing tsinelas (flip-flops for the affluent).

“It was slippery,” Matthew said.

“I kept tripping on my slippers,” Henry remarked. (The IMA hunks lost to the neighborhood tambays and had to treat them to a round of Coke.)

In the works are more light-hearted travel shorts.

“We’ve also been to Zamboanga, to attend a summer peace festival,” Daniel volunteered.

Henry related: “I took a 10-hour bus ride from Cagayan de Oro to Zamboanga. Unlike what we hear in the news, it was a peaceful trip all the way.”

They were open to collaborating with other people (institutions and YouTube sensations) in churning out videos—especially on travelogues which can be a bit pricey, they conceded.

Their biggest challenge was appearing in an indie film, though. (They posted behind-the-scenes footage online.)

Henry and Keys bagged pivotal roles (as American soldiers) in Adolfo Alix Jr.’s “Death March,” which was shown in this year’s Cannes.

“Keys and I had speaking lines,” Henry related with a tinge of pride. “Michael and Matthew also got cast as American prisoners of war who marched from Bataan to Pampanga during World War II.”

“But we were just in the background,” Michael said with a grin.

They look at the videos as training ground for future feature-length projects. Eventually,  they would like to shoot their own indie film.

“We want our film to be edgy, though. Nothing formulaic or cheesy,” says Michael.

Television has discovered the boys. They top-bill “Juan Direction,” which airs on TV5 every Saturday at 10 p.m.