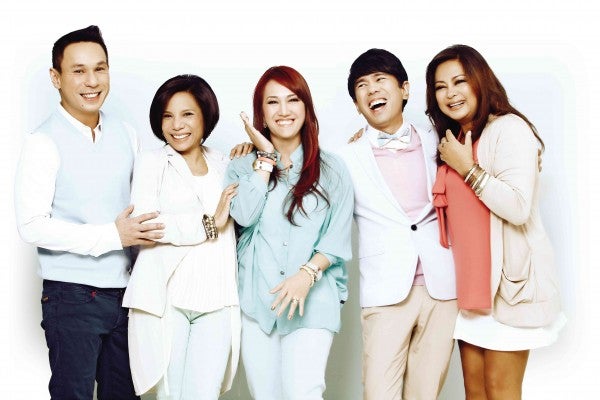 Since its formation in 1985, vocal harmony act The CompanY has witnessed and withstood the numerous shifts in trends and tastes in the local music industry—but not without experiencing fleeting moments of uncertainty and self-doubt.

Cecile Bautista, who sings alto for the five-member ensemble, recalled that some eight years ago, she reached a point where she started questioning whether or not the group’s music was still relevant.

“We were doing mall shows, and then the thought struck me: Do the people still know our music? Where is the group heading?” she told a group of reporters at a recent press con, which was also attended by Moy Ortiz (bass), Sweet Plantado (soprano 1), Annie Quintos (soprano 2) and Jay Marquez (tenor).

Ortiz, meanwhile, pointed out that the turnover of artists or the “changing of the guard” had been incredibly fast for the past decade or so—a far cry from the situation back in the 1980s or 1990s where the big names were expected to stay on top for a much longer period of time.

But the industry today is an entirely different beast, according to Ortiz, so it is up to them to adapt and keep up with the times.

And that was exactly what they did. “We just soldiered on and reinvented ourselves,” Bautista said. Much of the reinvention entailed venturing out of their comfort zone and being more embracing of more contemporary music.

“We lean toward the classics, jazz and standards; we changed things up a little. Very lolo kami mag-isip dati,” Ortiz related, adding that the group once did a rock collaboration with local band Orient Pearl as an exercise in versatility.

“But it’s very tricky,” he continued. “You don’t want to be too contrived that people will laugh at you, or too stubborn and get stuck with what you’ve been doing all along. It’s a balancing act.”

The change was evident in The CompanY’s 2012 “Lighthearted” album series which contained covers of Bruno Mars and Taylor Swift songs. While Bautista wasn’t exactly sold on the idea of recording covers at first, she observed that the move eventually helped them expand their market.

“We adapted; we included new things in our shows and albums, so we can address both the young and the not-so-young crowd,” Bautista said. “We have also been blessed to have a solid audience that really likes our sound. So somehow, andiyan lang kami lagi,” Baustista said.

Ortiz added that the key to adapting was staying faithful to one’s strength. And in the group’s case, it’s ensemble singing. “It’s important to know where you’re good at—the unique quality that will help you to stay in the game and with the times,” Ortiz said.

Although there weren’t many vocal acts today that could rival The CompanY in terms of experience and body of work, the group said they couldn’t be complacent. Well on its 28th year in the biz, the group still makes it a point to enroll in classes and attend workshops abroad.

“We always try to set the bar,” Ortiz said. “If you think that you’re a big fish in a small pond, you won’t grow as an artist. When you go to the ocean, you’ll find out that you’re not as big as you thought you were,” he said.

Ortiz remembered feeling humbled as he watched the recent Manila show of the celebrated a cappella group The Swingle Singers. And for a moment, Ortiz confessed, he felt inadequate as an artist. “Hindi pa pala kami marunong kumanta!” Ortiz joked. “But of course, we refused to give in to self-pity. We tried to see the experience as something inspirational.”

Two years shy of celebrating its 30th anniversary, the group has no intentions of slowing down any time soon. The CompanY bagged the best duo-group trophy at this year’s Star Awards for Music, as well as the best collaboration in a concert honor at the Aliw Awards for the “I Heart Manila” series with Bo Cerrudo, Jon Santos and the Whiplash dancers.

The group will also go to the United States for a series of shows with Regine Velasquez: Oct. 26 at Orange County California; Oct. 27 at Vallejo, California; and Nov. 3 at Mohegan Sun, Connecticut.

Plantado said they would continue making great music as long as there were producers and fans who believed in their talent “We will know when it’s time to stop, and we will be at peace because we did what we wanted to do and have nothing more to prove.”