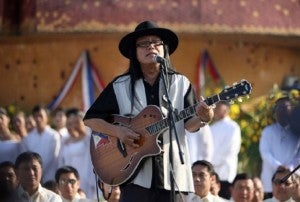 MANILA, Philippines—Qualified seduction charges were filed Thursday against Freddie Aguilar after his relationship with a 16-year-old drew flak from various sectors.

The complaint against the 60-year-old folk singer was filed Thursday afternoon before the Quezon City Prosecutor’s office by Fernando Perito, who said he was a member of the Integrated Bar of the Philippines and had the obligation to do what was right and prevent wrongs.

The complaint added Aguilar “deserves to be castrated to spare the children.”

According to the Criminal Law of the Philippines, qualified seduction falls under crimes against chastity.

It said in its element that the offender of qualified seduction committed a sexual relationship by means of deceit. The offended party is over 12 and under 18 years of age.

Perito asked the Senate impeachment court last year to cite members of the House of Representatives, who made up the prosecution team against then Supreme Court Chief Justice Corona, in contempt for presenting their evidence to the media. The complaint was set aside.

Claiming to be a crusader for lawyers’ ethics, he also asked the Supreme Court in 2011 to disbar Davao City Mayor Sara Duterte for punching a court sheriff, and just last year he also sought the disbarment of Justice Secretary Leila De Lima, which led to her disqualification by the Judicial and Bar Council from a list of possible successors to Corona.

This time around, the lawyer claimed to have been outraged, offended and scandalized by Aguilar’s relationship with a 16-year-old girl, with whom the folk singer had said publicly he was in love with.

Perito claimed in his two-page complaint that the girl could have simply been infatuated with Aguilar, he being a good and popular singer, and the 60-year-old music icon could have taken advantage of it.

He said Aguilar “wants to take advantage of the adulation of the child by pretending to be loving her and allegedly marrying her later, this old man deserves to be castrated to spare the children.”

The lawyer cited the folk singer’s boldness in announcing his love for the girl and claimed to have seen lewd photographs on the Internet showing Aguilar and his girlfriend.

Perito alleged that Aguilar’s admission and public demonstration of love violated morals and ethics “separating the adult from a child and the prey from the predator.”

“What this old man had done was to prey on the innocent child enough to be his granddaughter after allegedly being separated from his wife, which is no excuse,” the lawyer said, describing as “hogwash” Aguilar’s claim that he had been deceived by the girl’s height and thought she was already of age.

He added in his complaint, “The offender, an old man has an authority and moral influence over the child because of his popularity. And he must have devirginized her already every now and then.”

Perito concluded that if the girl’s parents had consented to the relationship, they should also be held criminally liable.

According to the Revised Penal Code, qualified seduction under Article 337 is: “The seduction of a virgin over twelve years and under eighteen years of age, committed by any person in public authority, priest, home-servant, domestic, guardian, teacher, or any person who, in any capacity, shall be entrusted with the education or custody of the woman seduced.”

Several Supreme Court rulings state that qualified seduction has these elements: the offended party is a virgin; she must be more than 12 and under 18 years of age; the offender has sexual intercourse with her; there is abuse of authority, of confidence or of relationship, which all must be present to constitute the crime.

Under normal practice, complaints are raffled to prosecutors to determine if the complaint merits bringing to court for trial.