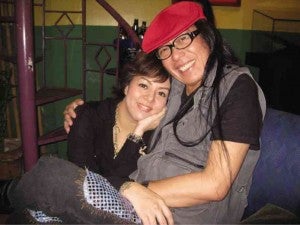 Freddie Aguilar has been getting flak from all corners because of his May-December romance with a 16-year-old girl.

Girls come and go but the constant “girl” in Ka Freddie’s life is his daughter, Maegan. Here are Maegan’s sentiments on the issue:

“She (Ka Freddie’s girlfriend) lives with us now. My family and I also stay with Tatay since I’m seven months pregnant. She’s nice and quiet. Her mom slept over once. It seems their (Freddie’s and the girl’s) relationship is serious. They met in Tatay’s show in Mindoro. At first, we thought she was 25 because she doesn’t look 16. She’s even taller than me. Beyond that, it’s none of my business.

“My brother is already 24 and his wife is expecting a baby, too. We are all grown-ups and we are glad that Tatay is happy. He has the right to live his life any way he pleases.

“Nothing you say or do will affect or ruin us anyway. My father and his song ‘Anak’ will forever be part of the foundation of our country. Whether you like it or not, nothing can change that.”

Spoken like a devoted daughter. Live and let live! Love and let love! Nobody’s too old or too young to love. Why wait until it’s too late?

Benjie Paras is one proud daddy. His 16-year-old son, Kobe, is the latest sensation in the basketball world. He represented the Philippines and won the International Slam Dunk Contest.

The young hardcourt heartthrob has signed up with GMA 7. (Brother Andre also joined the Kapuso network.)

What’s Benjie’s advice to his son about show biz and girls? “Just to act natural and to take acting workshops,” he said. “As for girls, it’s OK to fall in love but he should be ready to get hurt. Heartbreak should not stop him from loving because it will make him stronger.”

What are his do’s and don’ts for Kobe? “To graduate from college and never back out when he commits to something.”

In what ways are they alike? “Kobe is also funny and friendly,” Benjie said. “Just like me, he’s not a quitter and he loves challenges.”

Will Kobe be able to top Benjie’s feat in the Philippine Basketball Association (PBA), winning both Rookie of the Year and Most Valuable Player titles in the same year (1989)?

“It’s too early to tell,” Benjie said. “He’s in third year high school in La Salle. He still has a long way to go. But, of course, I’m here to guide and train him.”

With a PBA legend as his mentor, Kobe is just a few dribbles away from basketball superstardom.

Like any mother, Ate Vi (Vilma Santos) is concerned about her son, Luis Manzano, but she would rather let him fight his own battles.

The Star for All Seasons is secure in the thought that she has raised her firstborn well, so he’s well-equipped to hurdle whatever trials may come his way.

When asked to comment about Luis’ (rumored) breakup with Jennylyn  Mercado, here’s what Ate Vi had to say: “I don’t meddle in my son’s affairs. I just keep praying that they will both be OK. Luis runs to me from time to time. When I ask him if he’s OK and he says he’s fine, that’s enough reassurance for me. I just remind him that when he’s having problems, he should not forget to count his blessings.”

And that is also what Ate Vi will do instead of counting the years as she celebrates her birthday on Nov. 3. “I have so many blessings to be thankful for,” she says. “I’ll spend my birthday abroad with my family. I need to take a break to keep me sane. Quality time with my family is the best antidote to stress and fatigue.”

That Vilma Santos charm will never wane through trends and years. The radiance of Ate Vi’s smile is genuine, even when there are no lights and cameras to capture it. It comes naturally because it’s a reflection of the kindness of her heart.