“When they bring [an item] up to us, that is when we see it for the first time,” says Rick Harrison of The History Channel’s “Pawn Stars.” He continues, “They will tell us, ‘You are filming this, this and this.’ They will not let us see it or anything else like that [beforehand].”

So the reactions captured onscreen are spontaneous. Whenever an item’s authenticity is suspect, or when Rick, his father Richard “Old Man” Harrison and son Corey “Big Hoss” Harrison are not familiar with its current value, an expert is brought in.

These raw, unscripted exchanges, along with odds and bits of trivia, make “Pawn Stars” a success. Family friend and fan favorite Austin “Chumlee” Russell completes the cast. They look more like extras in a cooking show than leading men in a hit series.

From time to time, one of the four men reminds customers that what they’re running is a business and that the company, World Famous & Silver Pawn Shop, needs to make a profit. The show stands out for this brand of forthrightness. The low-rent smash mouth, in-your-face shtick that other reality shows are notorious for, is nowhere to be found.

Rick and Corey arrived in Manila earlier this week on the three-day first stop of an Asian tour. Inquirer Entertainment sat down with them just hours after they planed in, to discuss the show and the family-run business that is now known the world over.

Outfitted casually in distressed denims and dark tees, they strode into the interview place like the big TV stars that they are, cool and confident. The chat was very relaxed, almost friendly:

What was the original idea for the show?

Rick: It’s always good for business when we got press [especially] when we did something national. PBS (Public Broadcasting Service, the government station) did a documentary on us that was really good for business for, like six months, then it slowed down. On and off for four years, we were trying to get it [back] then we finally got it.

Corey: Leftfield Pictures and History Channel was the first production company/network that didn’t want to [make] the customers look bad, and didn’t want us to fight the entire time. So that was a big thing. We were not going to do a show that made pawnshops look like seedy places.

Rick: Yeah. I always wanted a show. I just never thought it would be this big.

What elements were removed from the original concept?

Rick: It has more or less been the same since the beginning. [but] they weren’t too sure about Chumlee. (Laughs.)

Corey: It’s funny: They [ran him by] a test audience. And everybody said they would never watch a show with him on it. Shows how great a test audience that was. (Laughs.)

Did they say why?

Corey: They just didn’t like him. But the president of History Channel at the time said, “I don’t care what they say; I am putting him on the show.”

What is the most interesting item that has come into the shop lately?

Rick: That is so hard to say; there are many different things.

Corey: One of the most interesting things for me is Willie Mays’ game-worn uniform. That’s a pretty big deal. The same uniform is in the Baseball Hall of Fame. I don’t know if anyone else in the world has that.

Rick: People ask, all the time, what the neatest thing in the store is. If you go to my store right now, you will see Picassos, Rembrandts, Chagalls on the wall…

Rick: So much great stuff [comes in] almost on a daily basis.

Anything from the Philippines?

Rick: As a matter of fact, in one of the episodes, they had a US soldier’s coat from… 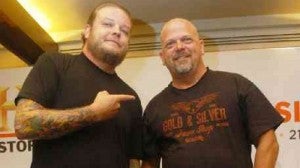 COREY “Big Hoss” Harrison (left) and dad Rick at the press con on Thursday. They have come across relics from the Philippine-American War in their Vegas shop. Photo by Arnold Almacen

Rick: Yes, that was really interesting and I am sure there have been other interesting things. I think we have some Filipino coins.

What do you consider the show’s greatest find?

Why is he not here?

Corey: He had this personal appearance in Canada that he signed up for a year ago. He couldn’t get out of it [but] he’d rather be here.

Rick: The greatest find is … the show, the show itself. It is the greatest thing that has happened to my shop; it has done so well. Before “Pawn Stars,” we were getting about 100 people a day in the shop. Now, we have 5,000 people lining up.

Rick: Yeah and my Dad thinks he is the ruler. (Laughs.)

Any specific item that you feel…

Corey: I think it was Brock Williams’ Super Bowl ring that kinda catapulted us to another level. When we got it, it seemed like we were getting pressed about it two or three times a week.

Rick: That is why I am really interested in sports stuff. I have Olympic medals. I have Super Bowl rings. I have a medal from the World Cup. Those are probably the greatest things in the store because even before the show, those were the ones that kept getting customers back and back and back.

How crazy have fans around the world been?

Rick: Really crazy. We were in Buenos Aires and 400 people were expected but 12,000 showed up. SWAT teams showed up. It was crazy.

Corey: I don’t think I’ve ever had a bad encounter but … now it takes me half an hour from the front door of the pawnshop to my office (in the backroom).

Rick: Yeah, there is just no way around it. But if it wasn’t for them, I would not have a show.

Would you consider trying the movies?

Corey: (Laughs) If something … yes, why not!