Wong Kar-wai has a hit with ‘The Grandmaster’ 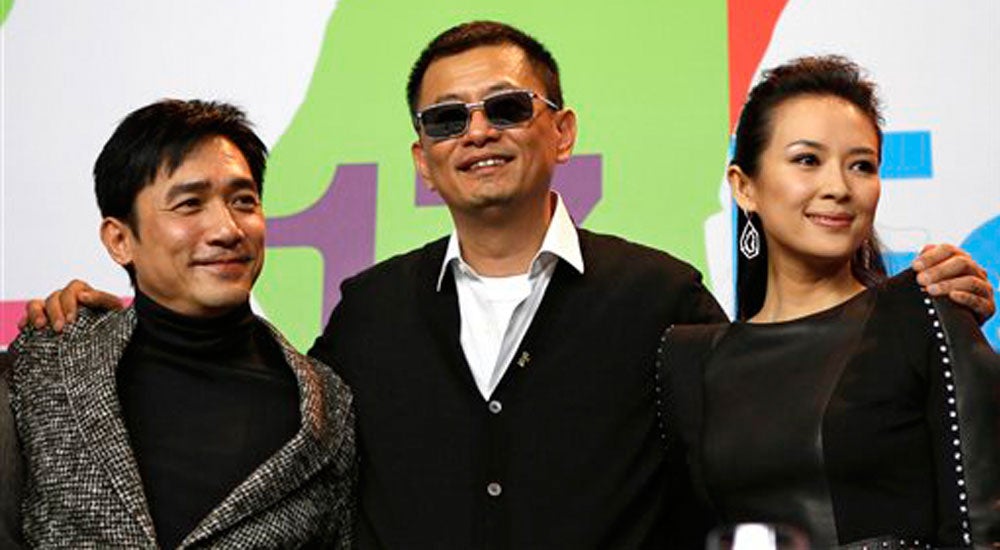 In this Thursday, Feb. 7, 2013 file photo, from left, actor Tony Leung, director Wong Kar Wai and actress Zhang Ziyi stand for photographers at a news conference for the film “The Grandmaster” at the 63rd Berlinale international film festival in Berlin. AP

He said that during demonstrations, fighters would “get knocked and fly” across a room in the lightweight manner most of us only see in movies.

Wong’s travels were part of a seven-year journey to bring his take on Chinese martial arts legend Ip Man to the screen, during which time others released a series of popular films about the same man. Still, “The Grandmaster” is Wong’s biggest hit, with his stylized emotional imagery punctuated by crowd-pleasing combat featuring stars Tony Leung and Ziyi Zhang.

While his films tend toward the poetic, Wong said he’s hoping for a concrete outcome for “The Grandmaster,” opening in limited release in the U.S. on Friday after earning $55 million worldwide. Wearing his signature dark sunglasses, he sat down to talk about the movie, the state of Chinese martial arts and censors.

AP: Why did it take so long for “The Grandmaster” to come together?

Wong: It’s very hard to understand Ip Man without knowing or showing the audience the time that he went through and the background of his family. So actually we have to rebuild the whole period. It’s a very expensive film. … (It was) not until seven years ago that the market of China became more and more mature, so we finally found the financing to support this film. Also, we had to do lots of training. Because our actors, they’re very good actors. But they have no training in martial arts. We want to make a hard-core kung fu film. It’s not stunts and CGI tricks. … We actually shot for 22 months over three years, during which we stopped twice because Tony (Leung) broke his arm during practice and rehearsal. So you see, it’s not easy to make a kung fu film.

AP: When did you first learn about Ip Man? What was his mythology and impact on you when you were growing up?

Wong: I was growing up on a street full of martial arts schools. … So we heard of Ip Man when I was a kid. And he was quite highly respected in the world of martial arts at his time. But he was quite an anonymous figure to general people. It was because of Bruce Lee that he became a legend. … There’s lots of misinterpretations about Chinese martial arts. … In those days, martial arts was not for poor people. Because they couldn’t afford it. … When there’s people trying to visit you to have a challenge, you have to feed them, you have to provide places for them to live, then you have to send them with gifts. So you need to be rich to be able to afford, to study martial arts. That’s why it’s so great about Ip Man is he popularized Wing Chun. Instead of $27, he asks only like 80 cents to teach this skill. It’s not just for money. Of course he has to make his living, but he also wants to make it for everyone.

AP: How was it seeing the Donnie Yen Ip Man films come out before yours?

AP: The film is already a big hit in China. How do Chinese audiences react differently than international audiences?

Wong: We all know in the last 30 years, China has went through very rapid changes. During this process, we see a lot of traditional values have been forgotten. To me the so-called modernization of China is simply adopting Western values. And it’s time for us to return to our roots, discover some of our heritage, especially like martial arts, Chinese martial arts. The funny thing is, in China today, martial arts exists in two forms. The one that is encouraged by the government is called competitive martial arts, which is considered as a sport. So there’s no school. It’s a combination of different skills from different schools and it’s for the Olympics. … And the other form, called traditional martial arts, exists only among individuals, without the support of the state or any resources. … This tradition of Chinese martial arts is not in very good shape. And in fact, I think what makes me very happy is the success of this film in China actually springs the awareness. Like well maybe it’s time for us to revisit this and someone should take care of this tradition of Chinese martial arts.

AP: How much do you have to pay attention to the Chinese film industry’s censorship? How much does it affect your storytelling?

Wong: For a film like ‘The Grandmaster,’ you don’t have any problems with the film censor departments. … The problem is there’s no ratings system in China. So that means films are supposed to be seen by all ages. So they’re very sensitive to like superstitions and pornography and something related to politics. And other than that, they are very supportive.

AP: Does censorship affect the stories you decide to tell as you look forward to your next project?

Wong: Yes, of course, you know the rules there. But the thing is, it’s also time for the censor departments to consider applying ratings systems. And I think they’ve been doing research on this, how to apply the system to the Chinese societies. And once we have this ratings system, I think there will be more flexibility for filmmakers.

Read Next
Christopher Doyle returns to Manila, collaborates with Filipino filmmaker
EDITORS' PICK
vivo brings to the Philippines a powerful smartphone with a slimmer body, the vivo Y02s for only PHP 6,499
Apple warns of flaw that lets hackers into iPhones, Macs
46% of schools nationwide to have full face-to-face classes on Aug. 22
House energy committee chair Arroyo bats for cheap electricity
What to watch out for when selecting a video surveillance solution
Heads may roll at BOC, says Palace if sugar smugglers are allowed to use recycled import permits
MOST READ
DepEd to give teachers P5K cash allowance within first week of classes
Dressing the dead: Indonesian villagers clean corpses in afterlife ritual
DOJ indicts bank officer in $2.1 billion Wirecard fiasco
Mayor bares issues vs closed QC school
Don't miss out on the latest news and information.