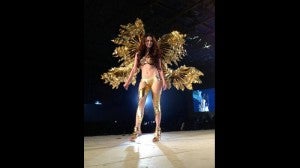 MANILA, Philippines — Even though the rainy season in the Philippines has already kicked in, the country’s sexiest women made sure to heat up a magazine’s victory party to scorching temperatures.

Marian Rivera led the 100 sexiest women who showed off their alluring bodies at the FHM 100 sexiest victory party Wednesday night at the World Trade Center.

GMA 7’s “primetime queen” is the number one sexiest woman in the Philippines this year beating Sam Pinto who topped last year’s poll.

She reclaimed the title four years after she first won it back in 2009.

Rivera and Pinto battled closely for the top spot in the online, text, and print voting conducted by the men’s magazine.

According to FHM, more than 16 million votes were cast this year.

The rest of the 100 sexiest women of FHM who graced the catwalk during the victory party are: