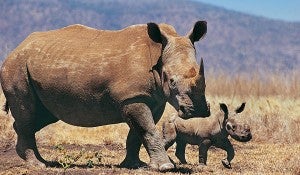 MANILA, Philippines – The population of rhinoceroses all over the world has depleted through the years, pushing them to the edge of extinction due to the widespread illegal hunting for their horns which are believed to cure a variety of ailments.

But medical findings have found no proof that the horn has medical powers.

Animal Planet’s newest three-part series, Battleground: Rhino Wars, explains just that as it documents the deployment of four current and former members of the US Special Operations Forces who were deployed to help local security forces stop the illegal trade of rhino horns in Greater Kruger area of South Africa.

“There’s a tremendous amount of misinformation,” Oz said in a phone interview together with Sawyer on the series that is set to begin Monday (June 10) at 9 p.m. on Animal Planet. 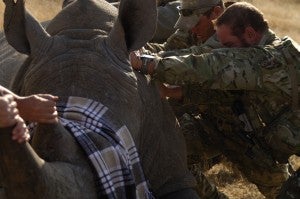 Oz was referring to several supposed medical uses of rhino horns of which include the aphrodisiac qualities and the alleged power to cure cancer.

“Rhino horn, as you know, is nothing more than keratin, so it’s the same substance that you have in your fingernails.  The only place that it’s ever really used is as a stabiliser in shampoos and conditioners,” Oz said, noting that this kind of misinformation is what horn poachers are using to keep their illegal business going.

The horns can cost up to US$65,000 per kilogram on the black market, the show’s information sheet said. South Africa is said to be home to 90 percent of the world’s rhinos. And nearly 700 rhinos are killed every year and over 290 have already been decimated in 2013.

Although it may seem that poachers are the ones causing the problem, Oz said that they are actually just among the victims of the real monopolizer that is the “middleman.” 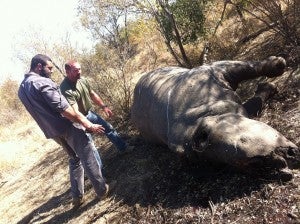 “The poachers are not really the problem; the problem is the market, the way that it’s driven is marketing a false concept to the people that are requesting the product,” he said.

“So you tell someone that rhino horn is an aphrodisiac; what they don’t tell them is that they’re mixing Viagra with the rhino horn in a powder…by itself is not very expensive – it’s maybe $10 a pill – but you combine that with a very, very rare mythical horn… now they’re charging half a million dollars for this rhino horn because they call it an aphrodisiac, or they say that it cures cancer,” Oz added.

Since rhinos are usually killed for their horns, Sawyer was asked if there is any possibility to salvage the lives of these animals when they are being dehorned.

Sawyer said it is possible and actually being done successfully by veterinarians as a pre-emptive measure to reduce its attraction to poachers. However, he said that is not the solution.

He also said that dehorning rhinos would also change their entire social structure as these animals use their horns to battle for supremacy in their environment. 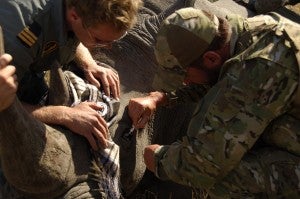 “If you take that away from the animal . . . you no longer have a rhino; you have a cow,” Sawyer added.

In the six-week stay of the group in South Africa, Sawyer said the general nature of their work was to find out when and where the poachers were, their identities, activities, the manner by how they go about the trade, and then to act on that intelligence in a bid to intercept the poachers before they can kill the rhinos.

Oz said they were defenders of peace, just as they were in their law enforcement careers, noting that they didn’t lose any animals that were under their watch.

Moreover, seven more syndicates composed of around 50 to 70 people were arrested and taken out of the poaching game.

In the three-part series, Oz said viewers are going to see the strong side as to how Special Forces go about their job, but will also witness these tough guys find an emotional connection with what’s going on.