Alexander Skarsgård reveals a new character in his ‘True Blood’ life–and will Eric be killed off? 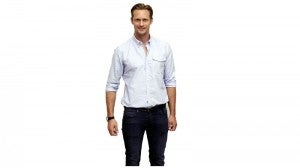 LOS ANGELES—“There’s a new… oh God, I’ve got to be careful here,” Alexander Skarsgård caught himself as he answered a question on what direction his vampire character Eric in “True Blood” is headed. But the actor revealed the “new” development in his 1,000-year-old fanged Viking sheriff’s life, anyway.

“Someone is introduced, a new character, into Eric’s life,” dished the 36-year-old Swede. A possible love interest? “Maybe, maybe not,” Alexander teased in this recent interview. “But there’s someone new who’s suddenly part of his inner circle.”

On the huge buzz that his beloved character will be killed in the sixth season, Alexander jested, “I’m right here!”

Then he said, “We’re wrapping up. We’re now [doing]  the last two episodes of the season. I’m obviously not going to reveal what happens in those last two episodes but Eric has been busy this year because, up until    now, the humans have been blood bags. Eric doesn’t really care about humans and they can’t really do anything. But this season, for the first time in a millennium, the humans can actually fight back. The governor of Louisiana has figured out a way to be a real threat and fight back. So it’s tough for Eric. It’s not as easy as it was before, dealing with the humans.” 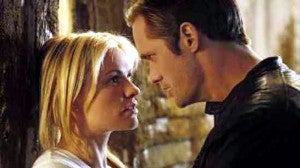 Alexander’s announcement that he bought a house in LA, where he shoots “True Blood,” may debunk the rumors that Eric Northman will die. “I got a home last year for the first time in 10 years,” he said. “I’ve been a nomad for 10 years, traveling around. I lived in my friend’s garage for two years and I was couch-surfing for many years. I woke up one day and realized I basically had been living out of my suitcases for 10 years, and that it was probably time to grow up, get a house—and so I

According to the 6’4”-tall actor, he purchased his own place in LA since he spends “about six months a year here. When we shoot the show, I’m here. When we were not, I was in Shreveport shooting ‘The East’ or in New York with ‘What Maisie Knew’ or ‘Disconnect.’ If I get a little break, I’ll go home. Last year, I went sailing.”

HBO’s hit vampire series made all the big difference in Alexander’s life. “Professionally, ‘True Blood’ changed things a lot for me,” he declared. “Before ‘True Blood,’ I did theater and movies. There was a level of uncertainty. You finish a job and then you’re like, ‘Uh oh, how am I going to pay my bills next month?’ What’s been great about ‘True Blood’ is … a lot of things. One of them is that it has given me security, financially, to do whatever I want creatively. It’s a lovely feeling, like last fall, when I did ‘The East,’ ‘Disconnect’ and ‘What Maisie Knew.’ All three were pretty small independent films.”

In “The East,” an ecoterrorism thriller directed by Zal Batmanglij, Alexander stars with Ellen Page and Brit Marling, who cowrote the screenplay. He plays a charismatic leader of an eco collective. “‘The East’ was a Fox Searchlight film but with a pretty small budget,” he said. “You basically work for scale in films like that. The year before that, I did ‘Melancholia.’ Money has [put me in a place] where I don’t have to worry about it. I’ve had ‘True Blood’ for the past six years, and that has given me the security where I can actually say no to bigger films with more money and take smaller ones and work for free. Because I love working with someone like Zal (Batmanglij), Brit (Marling) or Ellen (Page) or the people in ‘Disconnect’ and ‘What Maisie Knew.’” 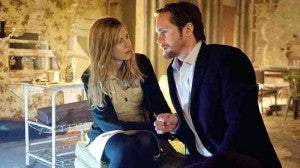 WITH Brit Marling in “The East.”

Alexander is, of course, the son of actor Stellan Skarsgård. “We’re kind of boring in our family because we follow either dad or mom,” he remarked. Mom is My Skarsgård, who is a doctor and divorced from Stellan since 2007.

Alexander is the oldest in a brood of six—five boys and one girl. He said, “Then dad and his new wife (Megan Everett) have two young boys. We’re a very big family—eight children total. Two of my younger brothers are actors, too.”

“Sam, my younger brother, is in med school and is doing his residency now. So he’s going to be a doctor. We’re either actors or doctors.”

Alexander paid tribute to his mother: “Mom went through medical school while raising six kids and taking care of the household. When I was a kid, dad was on stage doing repertory theater, which meant he would rehearse one play during the day and then perform another play at night. I love my father. He was a great dad when I was growing up but it was tough because I didn’t get to see him much. He worked 16-hour days, six to seven days a week. I would go to the theater and hang out backstage to see dad, basically. It was fun for a kid but it was tough.”

He added, “My mom had the huge responsibility because she had to take that whole load in a way. Dad was at the theater so much. She sacrificed a lot. Her work ethic is amazing because, as I said, she raised six kids and went through med school while doing that.”

There’s one other woman in his life that he admires. “My grandma back in Stockholm is pretty awesome and extremely charismatic,” he gushed. “I’m very excited to go home and see her. I haven’t been home in six months. I’m three weeks away from seeing her. I’m very thrilled.”

But first, Alexander has to do press promotions for the three films, “The East,” “Disconnect” and “What Maisie Knew.” And he has to finish shooting the last episodes of this season’s “True Blood.”

Out in the wild

“As soon as I wrap the show, I’m going with some friends to Iceland,” Alexander said. “We’re going to hike for a week. I very much look forward to that. Last year, I sailed across the Atlantic for a month, which was just wonderful—you have no cell phone reception, no e-mails, nothing. You’re just there and out in the wild.”

For Alexander, these trips are more than just vacations. “It’s important to not get stuck in the rat race or work, work, work because, as an actor, you draw inspiration from real life. You need to interact with people and not constantly be on a movie set.”