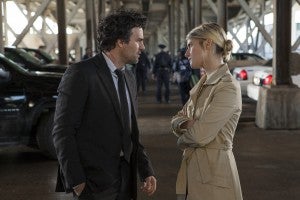 This film image released by Summit Entertainment shows Mark Ruffalo, left, and Melanie Laurent in a scene from “Now You See Me.” AP photo

Come to think of it, Hollywood films and magic shows have something in common: You pay your money, and you want to believe. Even if it’s exceedingly hard to do.

At the start of “Now You See Me,” a magic-themed heist movie with a high-powered cast including Morgan Freeman, Michael Caine, Mark Ruffalo, Jesse Eisenberg and Woody Harrelson, you really want to believe. The idea is fresh, the introductory scenes enticing.

Plus, the actual magic performances that anchor the film, directed by Louis Leterrier, are fun — and for a while you almost forget that you’re merely watching other people watch a magic show.

But then the dialogue turns formulaic, the plot gets increasingly hard to follow — even a film about magic needs an underlying logic — and character development seems to come to an utter halt, with interesting possibilities left unexplored.

It all builds up to a dramatic reveal at the end, one that, like the traditional rabbit in the hat, you weren’t expecting. But by then, it’s a bit too late. You’ve already disengaged.

It’s too bad, because the film has a great premise. Four professional illusionists are called together by a mysterious leader. Eisenberg is the cocky sleight-of-hand wizard who likes to run things and take all the credit. (Stop thinking about Mark Zuckerberg — wrong movie!) Isla Fisher is his former assistant, and an escape artist. Harrelson is an expert hypnotist, and Dave Franco is the talented street magician.

Soon they’re a formidable team: The Four Horsemen. They thrill a magic-show crowd in Las Vegas with a tantalizing heist that involves robbing a bank in Paris by “teleporting” a man from the audience across the pond, then rewarding the crowd with stolen euro notes.

Enter Ruffalo’s rough-edged FBI agent, Dylan Rhodes, who swigs liquor and coffee and Alka-Seltzer, partnered by a winsome French Interpol agent with the odd name of Alma Dray, played by Melanie Laurent. She’s not all that believable, though it’s great fun to witness her comeback at one point to Dylan’s brutish order to “Stay in the car.” (You go, Alma!)

In his pursuit of the Horsemen, Dylan will run up against Thaddeus Bradley — Freeman, having a good time in the role of a former magician who’s now a reality host, exposing current magicians. He shows Dylan how the Paris heist was likely achieved, but the harder job is figuring out who’s in charge, and what they’re up to next. Because, as characters tend to say in this film, the key thing is to be a step ahead of everyone else.

Freeman is fun to watch, as is Caine, as a presumed benefactor of the magicians. Ruffalo offers the most fully fleshed-out character, and he can be very funny. In one entertaining fight sequence, he slugs it out with Franco (yes, brother of James) amid capes and wands and all sorts of magic equipment.

Then Franco’s Jack Wilder brandishes a deck of playing cards, his last weapon left. “Really?” Ruffalo asks, with a priceless look on his face. Turns out, playing cards handled correctly can cause pain.

Other actors are somewhat wasted in this script by Boaz Yakin, Ed Solomon, and Edward Ricourt. Harrelson’s Merritt McKinney is wise-cracking, Fisher’s Henley Reeves is feisty, and Eisenberg’s J. Daniel Atlas is high-strung and fast-talking, but beyond that we know little. A romantic past is hinted at between Fisher and Eisenberg’s characters, then pretty much dropped.

As for Ruffalo and Laurent, they get their moment, but it would have been nice to see some meaty dialogue between them. And you know it’s getting formulaic when, at a climactic moment, the 10-year-old boy watching the film next to you mutters: “That always happens.”

You’ll smile at the enjoyable final reveal, patently absurd as it is. But you won’t be feeling much magic.

“Now You See Me,” a Lionsgate/Summit release, is rated PG-13 for language, some action and sexual content. Running time: 116 minutes. Two and a half stars out of four.