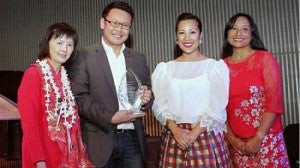 The award was given at a ceremony held early this month at the new San Francisco Jazz Center and hosted by reality TV star Yul Kwon, honoring individuals and organizations that have made an impact on the performing arts and the Asian Pacific American community in San Francisco.

“This year, our celebration theme is ‘Honoring Achievements in the Performing Arts’ and we are delighted to present a very special recognition to Myx TV, a cable network that is committed to providing opportunities for APA performing artists on the stage of mainstream media,”” said Claudine Cheng, founding chair of the San Francisco Mayor’s Asian Pacific American Heritage Celebration Committee.

“Asian American talent was big enough to go from YouTube to television screens,” said Miguel Santos, general manager for Myx TV. “We always knew that more than providing entertainment, we were providing a platform.”

Since it first went live in 2007, Myx TV has featured exceptional Asian American talents on its nationally broadcast cable channel. Its early support of artists like Bruno Mars, Far East Movement, and Jessica Sanchez has given Myx TV a reputation as one of the strongest advocates of Asian American entertainers. The network has also received recognition from the cable and entertainment industry, with accolades from CableFAX Magazine and NAMIC, among others.

Read Next
Greater than the sum of its zany parts
EDITORS' PICK
Countries with confirmed cases of coronavirus
Get exciting deals and discounts when you download the new McDonald’s App
China expands lockdown against virus, fast-tracks hospital
‘A greener, cleaner tomorrow’: A how-to guide for Filipinos who want to help with today’s energy crisis
SM continues to send relief assistance to remote towns in Batangas
FlipTop rapper Loonie freed on bail
MOST READ
Taal’s sulfur dioxide emission increases
No time for revelry; Tagaytay instead plans for alert level 5
Seized food items from China tested positive for ASF–BOC
Megan Young, Mikael Daez get married
Don't miss out on the latest news and information.