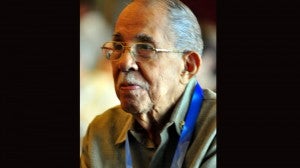 MANILA, Philippines—The Cultural Center of the Philippines will pay tribute to the late National Artist for Film and Broadcast Arts Eddie Romero in a necrological ceremony on June 2 at 9 a.m. at the CCP Tanghalang Nicanor Abelardo (Main Theater). Interment will be at the Libingan ng mga Bayani.

Proclaimed National Artist for Film in 2003, Romero has been considered as the quintessential Filipino director.  With a long career that spanned three generations of film makers, he produced, directed and wrote an impressive and remarkable body of work that includes landmark works “Ganito Kami Noon…Paano Kayo Ngayon?,” “Aguila,” “Kamakalawa,” “Banta ng Kahapon” and “Noli Me Tangere.”

Romero was a prolific filmmaker. He ventured into filmmaking at the age of 17 when he wrote the screenplay for the 1941 film “Ang Maestra” for Gerardo de Leon, the influential director later named National Artist for Film.

He started his directorial career as a pinch-hitter for de Leon who became unavailable while shooting “Isumpa Mo, Giliw” (1947).

The first, from 1947 to 1956, saw Romero writing and directing 23 films that included “Buhay Alamang,” “Ang Asawa Kong Amerikana” and “Maria Went to Town”.

In the mid-1950s, Romero made his foray into the American B movie genre, making films like “Brides of Blood Island,” “Mad Doctor of Blood Island,” “The Beast of the Yellow Night” and “Black Mama, White Mama” that were successes in the US and achieved cult status.

The third phase of Romero’s career is hailed by film historians as his great comeback to filmmaking. He made  “Ganito Kami Noon…Paano Kayo Ngayon?”, “Aguila,” “Kamakalawa,” and “Hari sa  Hari, Lahi sa Lahi” and other significant films—all of which are part of what is considered a renaissance of Filipino cinema that took place in the 1970s.

When Romero was conferred the National Artist Award in 2003, he was cited as a filmmaker “whose life is devoted to the art and commerce of cinema” and as an “ambitious yet practical artist” who “was not satisfied with dreaming up grand ideas.”

He found ways to produce these dreams into films.  His concepts, ironically, are delivered in an utterly simple style—minimalist, but never empty; always calculated, precise and functional, but never predictable.”

Read Next
Producers cancel ‘Dirty Dancing’ tour in Manila
EDITORS' PICK
PH detects local transmission of Omicron subvariant BA.2.12.1
OVP: Pilot’s claim vs Robredo ‘never happened’, a ‘malicious fabrication’
Luxe property: A way to build, preserve wealth
Petition to reverse Comelec decision on Bongbong Marcos’ DQ case reaches SC
Honolulu Café is the cure for your Egg Tarts and Roastings cravings
House energy committee chair Arroyo bats for cheap electricity
MOST READ
Man posing as Marcos spox revealed to be an inmate in Bilibid — Guevarra
Heart Evangelista gets a ‘no’ from Chiz Escudero after asking, ‘Do I deserve a bag?’
Congress canvassing of votes for president, VP to begin May 24
3 Iloilo residents found with Omicron subvariant
Don't miss out on the latest news and information.