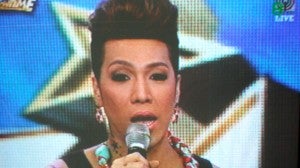 MANILA, Philippines–Television host and comedian Vice Ganda (Jose Marie Borja Viceral) apologized to  GMA Network executive Jessica Soho for making fun of the latter during his concert at the Araneta Coliseum on May 17.

Speaking at the start of ABS-CBN noontime show “Showtime’’ on Wednesday , Vice Ganda admitted he had offended Soho and some other people who he used as subjects of his jokes.

“Buong puso kong gustong humingi ng tawad ke Jessicca Soho,’’ Vice Ganda said, adding he tried to call Soho Wednesday morning to personally offer his apology. He said Soho answered the telephone but told him she was not in a good mood to really talk to him.

Vice Ganda said he thanked Soho and admitted the TV exec might not be ready yet to forgive him.

So Vice Ganda made his offer of apology public and promised not to include Soho among the people who will be the subject of his jokes.

He also said he did not mean to malign or ridicule rape victims when he made the jokes during his concert.

“I’m not a perfect comedian. I’m sure not all my jokes are funny. But it actually depends on people hearing those jokes how they will take it,’’ he said.

But he reiterated his apology to the people he might have offended in his jokes.

“I would like to make clear to all that I have no intention of making fun of victims of rape…nevertheless, I would like to apologize to those who felt they were offended,” he said.

Vice Ganda said he was hoping that his apology would put an end to the controversy and speculations.