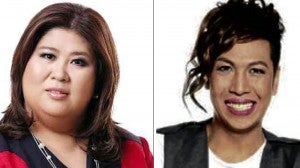 On Tuesday, GMA 7 vice president for news programs and news anchor Jessica Soho slammed comedian Jose Marie Viceral—more popularly known as Vice Ganda—a talent of rival network ABS-CBN, for a “cruel” joke the latter made about her during his recent concert.

Soho told the Inquirer by phone Tuesday she had taken more than a week to decide whether or not to take action after receiving reports of the sexist slur. “I’m happy that I moved on rather quickly, but other people have started speaking out in my defense.”

In a text statement,  Soho said “I thank all those who shared my hurt and expressed their support…this should [no longer] be about me but about rape victims who suffer tremendously from this horrible crime.”

On May 17, during the packed concert titled “I Vice Ganda Mo Ako sa Araneta” at the Big Dome, Viceral staged a whole segment about unlikely celebrities becoming bold stars.

The segment, uploaded on YouTube in its entirety, included jokes about Soho, the only GMA 7 personality among ABS-CBN stars (Boy Abunda, Kris Aquino, Gus Abelgas and Kim Atienza) “roasted.”

Should Soho start making sexy movies, Viceral said, the pivotal scene should be a gang rape. This followed a joke—and was followed by another—about Soho’s weight.

“I could let the fat jokes go,” Soho told the Inquirer earlier. “But he had to go so far.”

On Tuesday morning on his dzBB radio show, “One on One with Igan,” Arnold Clavio ranted, directly addressing Viceral: “Why victimize serious people who have serious jobs (Soho is an award-winning broadcaster)? You shouldn’t be using them just to make others laugh. Why don’t you just do that to your colleagues over at ABS-CBN?”

Sought for comment, a top-ranking ABS-CBN executive told the Inquirer by phone that the network wasn’t sure it should get involved. Besides, the executive said, it had been 11 days since the concert at Smart Araneta Coliseum. “Why are they doing this only now—and isn’t it curious that all the complaints so far are coming from their (GMA 7’s) news people?”

From Viceral’s camp, road manager Russ Samson sent the Inquirer a text message at press time saying they were still waiting for the comedian’s “go-signal” to issue a statement or clarification.

Read the full story on Wednesday’s print edition of the Philippine Daily Inquirer.