For Alden, no more slippers and shorts | Inquirer Entertainment

For Alden, no more slippers and shorts 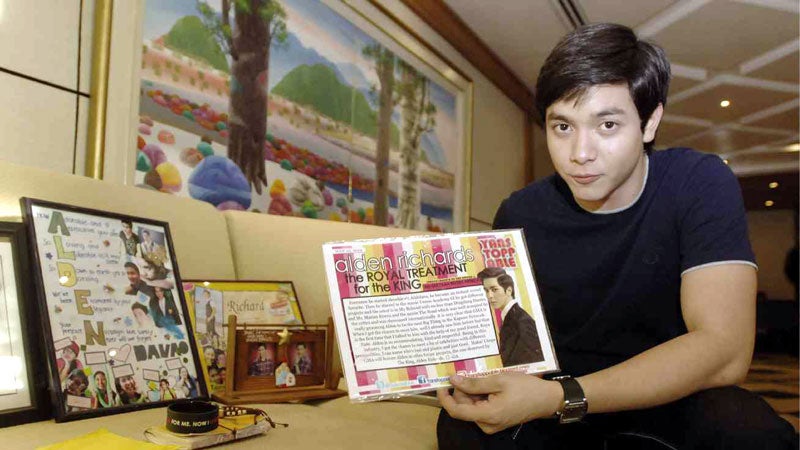 For actor Alden Richards, the downside of being a show biz celebrity is having to look “presentable and expensive” at all times.

“I always get scolded by my handlers when they see me in slippers and shorts. I’m always reminded to look the part of a TV personality. I find this so tedious at times. Dressing up is really not me,” Richards tells Living Stars. 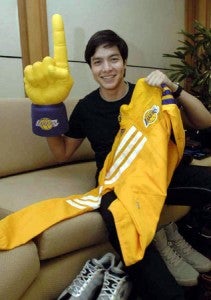 THE LAKERS fan shows off his souvenir jacket and foam hand.

“Looks are important, I’m often told. They say I should not look like an ordinary guy or else I’ll hear comments like ‘artista ba talaga ’yan?’ That’s why I became conscious of my outfit and even my skin,” the 20-year-old actor says.

This is why he says “Tisoy,” his character in the now-defunct GMA 7 series “One True Love,” is closest to his heart. “He survives wearing T-shirts, shorts and slippers,” he says.

“In show biz, everything matters, even your nails.” 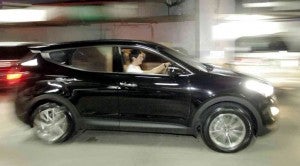 THIS 2013 Hyundai Santa Fe is one of the fruits of Alden’s hardwork.

Richards was introduced as a Kapuso actor in December 2010, first appearing in the afternoon soap “Alakdana,” with Louise delos Reyes. He is now regularly seen in the prime time drama series “Mundo Mo’y Akin” by Andoy Ranay. He also released recently a self-titled album under Universal Records.

Like many young people, Richards loves gadgets but makes it a point to do his research before buying, which he recommends to other people. “Try to compare a product with the competition,” he suggests. “Look at the specs. Read the reviews (and) see comments from people who bought that particular brand.”

He adds that the product should be worth its price. Richards has a Sony Vaio S Series 15.5-inch laptop with a Core i7 Intel processor. “It is blu-ray ready and has a maximum full HD of 1,080p (pixels),” he says.

He describes his Powerbeats headphones by Dr. Dre as the “boss of all Beats.” He explains, “DJs in clubs prefer these to the normal headsets because they produce a good sound. I also have a Skull Candy earphone, which is smaller. I use it when I make calls with my iPhone 4S. This cell phone is my second. I left the first beside an ATM.”

He also has the latest version of the Sony PlayStation game console, PS Vita. “It has touch screen. I play ‘Asphalt: Injection,’ where I learn a lot about car brands, and ‘Uncharted,’ which is like the male version of ‘Tomb Raider’.”

Richards, who confesses to being a shoe lover, says he only buys comfortable pairs. “I don’t want to bring slippers wherever I go, to wear when my feet start to ache,” he says. “I got this pair of Vlado shoes, which was first endorsed by Justin Bieber, as a gift when the movie ‘The Road’ premiered in Los Angeles. I met one of the marketing people of Vlado and he gave me a few pairs. I have pairs in blue leather, snakeskin and a high-cut leather version in gray.”

TROPHIES he won since he joined pageants in 2008

“My handler, Kuya Chris, gifted me with a pair of (brown leather) shoes from Topman. They were my first-ever sosyal shoes. I also have a pair of boots from Skechers that I really like because they’re unique. They’re not only comfy but also make me look a little taller because of the thick soles.”

Richards, an avid Los Angeles Lakers fan, watched his first live National Basketball Association game at the Staples Center in May 2012. “Dr. Vicki Belo gave me tickets as a token for visiting her clinic in Glendale (California). I brought my friend (fellow Kapuso actor) Derick Monasterio to the game. We saw Hollywood celebrities like Kim Kardashian, Zac Efron, Kanye West and, of course, Jack Nicholson, who attends all Lakers’ games.”

Richards bought a Lakers jacket and a foam hand as souvenirs. “This jacket cost over a hundred dollars and the foam hand, $30. I know it will be a while before I can go back there so I bought the items even though they’re kind of pricey. It was a fun experience.” 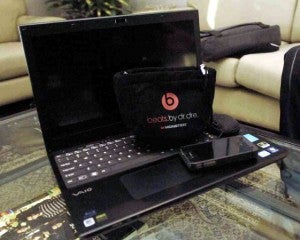 He also keeps memorabilia from fans. “Whenever I join GMA 7 in its regional promo, I would contact Nate Gonzaga, founder of my fans club, to arrange a meet-and-greet with ALDENatics in the area. I’ve received keepsakes from supporters in Iloilo, Bacolod, Cebu and Davao. I especially like this baller band from a supporter that says, ‘Live for Jesus.’ I appreciate it because it has something to do with God. Every thing I do, I do for Him.”

Richards says he is not brand conscious when it comes to eyewear. “Normally, I look at the UV-protection factor. I prefer square frames because they [suit] my heart-shaped face. I like RayBan Wayfarers. I also bought a pair from Kenneth Cole that was John Lennon-

inspired. It was my reward to myself for working so hard for the past two years.”

The actor also keeps shades by Pepe Jeans and RayBan Aviators. He especially likes the pair that GMA 7 executive Tracy Garcia gave him in 2011 as a birthday gift. “I use it almost everyday because it’s very light and doesn’t leave any marks on the bridge of my nose.”

Richards got a pricey Kenneth Cole watch during a recent trip to the United States. “Apart from the style, I like its rubber straps. Since my skin is acidic, I avoid using metal straps because they turn green in color,” he says. “I have other watches but I use this one every day. I can’t seem to get out of the house without wearing a watch. I feel naked without it.”

His trainer, James de Leon, made him buy a jump rope. “If I don’t have time to go to the gym, I jump-rope. This burns calories while targeting everything—shoulders, arms, abs and chest. I do 400 repetitions. If I miss a count, even when I’m already in 399, I go back to 1. For beginners, I suggest they jump rope for five to ten minutes straight, resting only for 30 seconds or less.” 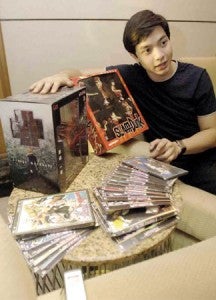 ALDEN is a collector of anime action figures.

Richards loves Lacoste Pure “because it smells fresh, like I’ve just showered. Its scent lasts all day. I also use Clinique Happy. I like its sweet-like-candy smell.”

Folded & Hung provides most of Richards’ clothes. “I got many Marvel shirts from F&H when we launched a campaign a few years back. I used to think F&H was all about T-shirts until I discovered its long-sleeved and polo shirts, as well as its jackets and denims. It’s high fashion at a low price,” he says. “I like the texture of this F&H jacket in brown and black leather. I use it a lot.”

“I prefer straight-cut denims to trendy skinny jeans, which are constricting. I always go for comfort. I buy clothes made of thin fabrics, [to let] air … through,” he says.

“This Oakley backpack was a birthday gift from people in GMA Artist Center,” Richards says. “They gave this to me when they saw my old bag, which looked like it had been used by an elementary student every day for a whole school year.” 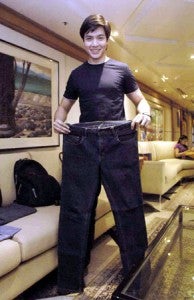 HE PREFERS denims with light fabric like this piece from F&H.

“I use Evian spray when I have to wear makeup to remove excess oil for a good finish,” he says. For hair products, he relies on Osis. “Its gel is easier to rinse … I also like its wax product because it gives a matte finish. It holds well.”

After an accident on the set of his previous TV show, Richards always carries a first-aid kit. “In my kit, there are cleansing wipes, an all-purpose gauze and band aid.”

Richards collects animé action figures from the manga “Bleach” and “Slam Dunk.” He advises would-be collectors to “never take a piece out of its box because its price (drops). “It’s like a car that immediately depreciates by 40 percent the moment you drive it out of the casa.” He says, “For Japanese animé action figures, I recommend Bandai products although they are pricier than most brands.”