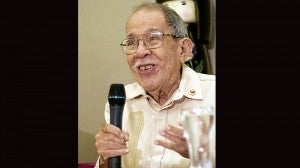 In a phone interview with the Philippine Daily Inquirer, the young Romero said that the veteran director “fell into a coma.”

“The doctor told us that he has a blood clot in the right side of the brain,” said the younger Romero.

He had been in and out of the hospital for the past few weeks. He was first confined from May 18 to 19 and returned to the hospital on May 23 because of “health complications.”

“He died peacefully,” said the younger Romero. “Last time we talked, he said he wanted to go home.”

His son said the family were planning to hold the wake at Arlington Memorial Chapels on Araneta Avenue in Quezon City.