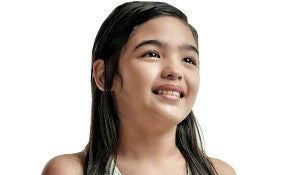 ANDREA Brillantes is the new Annaliza.

She may be just 10 years old, and her show-biz career just starting to take off, but child star Andrea Brillantes can already see herself working behind the camera, when being in front of it has lost its appeal.

“I enjoy taking photos and my mom tells me they look nice!” she said. “I want to become a director, a writer or a photographer when I grow older. I want to be behind the scenes,” Brillantes told a small group of reporters at a recent media gathering for ABS-CBN’s remake of the popular 1980s television drama “Annaliza,” where she plays the title role.

The late Julie Vega was the original Annaliza.

For her dream first photo shoot, Brillantes said she wanted her subject to be her idol Kim Chiu. Her directorial debut, on the other hand, will most likely have “Annaliza” costar Zanjoe Marudo (who plays her father, Guido) as lead actor, she added.

Prior to this big break, Brillantes often played the role of a teleserye’s star as a child. She was the young Andi Eigenmann in “Kahit Puso’y Masugatan,” Jessy Mendiola in “Precious Heart Romances: Paraiso” and Kim Chiu in “Ina, Kapatid, Anak.”

“I’m very thankful and happy that I was chosen to play Annaliza because it’s my dream to star in my own show,” she said. Brillantes said she googled Vega on the Internet to know more about her, learning about her birthday and death.

Looking sweet and adorable in a pink dress, Brillantes was refreshingly self-assured when asked if she believed she could carry a television show on her own.

But the precocious youngster clammed up when the subject of competition with other ABS-CBN child stars, such as Xyriel Manabat, was brought up. “I don’t know,” she murmured. “Mas matanda po ako?” she offered, drawing laughter from the crowd.

Currently a Grade 4 student in Ambassador School for Children, Brillantes said she might resort to home-schooling next academic year because of her increasingly heavy schedule.

Do her schoolmates and friends know that she’s an actor? “Yes, they’re happy and proud of me. Sometimes they approach me for photo ops,” she said.

Brillantes, who joined the kiddie gag show “Goin’ Bulilits” in 2010, proudly announced she was able to buy herself a cell phone and an iPad from her earnings. “Someday I want to have a nice bedroom!” she said.

Business unit head Ruel Bayani said their version of  “Annaliza” would be generally faithful to the original series. “But, to make it relevant today, we incorporated different social issues we encounter now,” Bayani said.