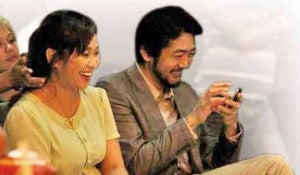 YUKI says of this photo posted on his Facebook: “As you can see, it was really fun working with her (Domingo).” facebook photo

Totally committed to his craft, Hollywood-based Japanese actor Yuki Matsuzaki would go to great lengths to transform himself for each new role.

True to form, Matsuzaki altered his look to play Eugene Domingo’s lover in Leo Abaya’s “Instant Mommy,” an entry in the New Breed section of this year’s Cinemalaya.

“I lost 15 pounds because I thought my character should look sharper. Good thing, Leo and I were on the same page,” Matsuzaki told the Inquirer. “Leo also asked me to grow a beard so that I’d look older. I was supposed to be 42, over a decade older.”

He pointed out: “I know I look older than my age and I often get cast as someone more mature.”

In Clint Eastwood’s 2006 war drama “Letters from Iwo Jima,” he portrayed a World War II soldier who was also 11 years older than he was then.

“That means that he rolls the camera on rehearsal and sometimes doesn’t shoot the actual take,” he related. “Shooting was fast, as a result. He said he preferred the first performance because the actors didn’t know what to expect yet.”

The performance is thus more spontaneous and natural.

Abaya worked in the same way as Eastwood, he said. “Leo is big on the first take as well. The other day, I heard Leo say something Clint had said to me, too: ‘The first take is always the best.’”

Matsuzaki also had a blast working with funny girl Domingo. “Most of my scenes are with Eugene. She’s absolutely fantastic.”

Four years ago, he got to work with Hollywood comedians Steve Martin, John Cleese and Lily Tomlin in “Pink Panther 2.”

“It was such an educational experience to work with experienced Hollywood actors,” he said. “They were sincerely friendly and treated me with utmost respect. I realized that no matter how famous you are, an actor is just an actor. (Big stars) are people, too.”

He also guested on the HBO series “Newsroom.” 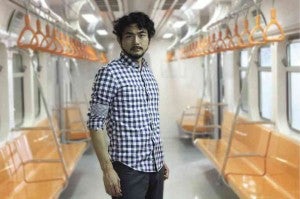 “Since it was an Aaron Sorkin show, the lines of dialogue went extremely fast,” he recounted.

He admitted that he felt uneasy playing a spokesman for the beleaguered Tokyo Electric Power Company, which was devastated by the earthquake-tsunami of 2011, on the Sorkin series. “My character had to announce false reports to the world even though he knew the truth. At first, I wasn’t sure if I wanted to play the part.”

He did not want to undermine the efforts of the people of Fukushima in rebuilding the prefecture after the disaster. “But I knew that the character had to be portrayed responsibly.”

After doing the role, he decided to send his paycheck to Fukushima “as an act of atonement.”

Being an Asian actor in Hollywood could be an uphill climb, he said.

“Even though the situation is getting better, I don’t think the Asian presence in Hollywood is strong enough. That needs to change.”

He explained that the power and promise of Asian artists were “much bigger than we think.”

“It’s vital for Asian governments to support our films in the global scene. If our profile improves in the world’s film market, then Hollywood studios will recognize our presence.”

He accepted “Instant Mommy” precisely because he wanted to do an Asian film after 13 years in Hollywood. “I wanted to be part of a film that would strengthen the bond of Asian countries,” he said.

To prepare for his role, he studied Filipino, picking up words like galing (good) and masaya ako (I’m happy).

He hopes to attend the Cinemalaya fest in July. “I saw (Domingo’s Cinemalaya film in 2011) ‘Ang Babae sa Septic Tank’ (on video) and it was hilarious.”

After working on the set of “Instant Mommy,” he has experienced first hand “that Filipino filmmakers are very passionate about their craft. They love making films for the audience. I hope they would receive enough support from the government and the people.”