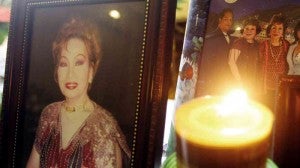 FLORES may have seemed mean on screen but she was a “loving and truthful” mom, says daughter Ruby Arcilla.

The family of the late veteran actress Bella Flores plans to establish a foundation in her name and to organize a fundraising concert to benefit show business personalities with Alzheimer’s disease.

This was announced Tuesday night by singer Imelda Papin, Flores’ niece. Flores was diagnosed with early stages of Alzheimer’s and diabetes months before she died on May 19. The concert is tentatively set for July at the Aliw Theater in Pasay City, Papin said.

Flores’ daughter Ruby Arcilla said during the wake on Tuesday, “If mom’s death could pave the way for… these projects, she would be very happy. She always tried to do what she could for her colleagues.”

Arcilla said a woman approached her during the wake to say thanks. “The lady said she showed mom her doctor’s prescription and mom gave what she could afford. I hope other actors would do the same— give from their hearts.” 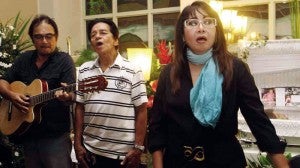 Flores was scheduled to be cremated on Wednesday morning. Instead, her remains were laid to rest at the Our Lady of Eternal Peace in San Jose del Monte City, Bulacan on Thursday morning.

Arcilla and Papin thanked the Santiago family of the defunct Premiere Productions, for helping give Flores “a decent exit.”

The chapel at the Loyola Memorial on Commonwealth Avenue, Quezon City, was filled to capacity when the Inquirer arrived at 8:30 p.m. Tuesday.

Arcilla spoke briefly after the Mass. “My mom was the opposite of the mean persona we were so used to seeing on screen. She was a loving and truthful person. I hope people will not forget her and her contributions to show biz.”

Flores, in a red Chinese-collared dress, lay in a white coffin surrounded by white daisies, orchids and anthuriums. On top of the coffin was a copy of a magazine with a feature story on her. A few meters away, an easel held a framed charcoal portrait of Flores. 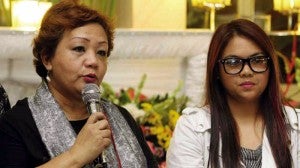 ARCILLA and daughter Jessica thank family and friends. “Mom also did what she could for colleagues,” Arcilla said.

Castelo, a former Quezon City councilor, said his group, Dakilang Lahi Foundation, had planned to give Flores the People’s Artist award long before the actress passed on.

The late comedy king Dolphy was the first recipient of the award in 2012. “We hope to present this posthumously this month. She deserved it for being an icon in show biz and a resident of Quezon City. She was irreplaceable,” Castelo said.

Papin, cousin of Arcilla’s husband Jess, said Flores was still breathing when brought to the emergency room of Quezon City General Hospital on Saturday, but was already very weak. “She was pronounced dead while I was on my way there,” Papin recalled. “We are consoled by the fact that she was lucky to have reached the age of 84, still able to do TV shows and commercials.”