A heady dose of indie rock, fashion at Wanderland fest 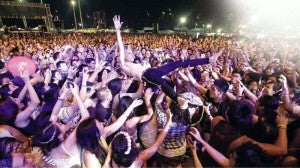 You enter the vast Circuit Makati grounds to attend the 2013 Wanderland Music and Arts Festival last Saturday, and the first thing that catches your attention is not the music, but the people—their fashion sense, to be exact.

The rowdy all-black-wearing, skinny jeans-rocking, pee-filled-bottle-throwing pankistas are nowhere in sight, as expected. Instead, you are greeted by the young and the stylish, and quite possibly… hipsters. Or, are they?

The default attires are permutations of denim cutoffs and tank tops in a dizzying spectrum of colors, prints, cuts and patterns. As you turn your head every which way, you see girls wearing flower headbands or boys sporting headdresses. In an event that screams “the shorter, the better,” you feel awfully overdressed in jeans and collared shirt. But then you see revelers in kaftans and full-on astronaut costumes and suddenly you’re… underdressed. 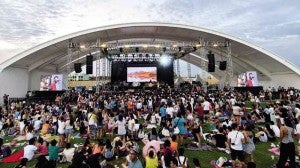 Once you get over the fashion side of the scene, you can finally turn to the music. Onstage you see Tully on Tully’s Nathalie Foster in a bright red dress, playing the tambourine and tousling her long tresses as she sings “Stay.” With the sun starting to set, Nathalie lends her soulful tone to songs that vacillate between dark and heavy, quirky and breezy, which makes you want to just sit on the lawn and listen to the sounds. And when you do, you smell the scent of freshly trimmed grass, still a bit damp from the light afternoon rain.

Tully on Tully is the seventh act in this music festival. Taken by Cars, Pulso, She’s Only Sixteen, Colour Coding, Yolanda Moon and Avalanche City have performed early on, and you regret not arriving earlier. You can only take consolation in the fact that the main acts Nada Surf, Neon Trees and The Temper Trap have yet to perform.

Although the atmosphere crackles with youthful energy, it’s relatively chill and laidback compared to usual music events. While some spectators gather around the stage, others stay back and drink vodka with friends, and still others just lie down and watch the clouds, smoking while absorbing a heady dose of indie rock music.

Save for the occasional breeze, it’s a pretty humid evening. But Up Dharma Down knows how to make you feel better. Led by Armi Millare, the band unleashes an intoxicating sonic cocktail— languid and sensual, funky and skippy, synthy and trippy, at times arcade-ish. 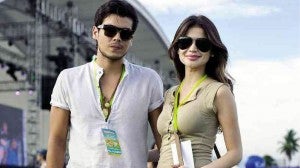 “Don’t let me down now,” Armi tells the audience, and you start cheering and dancing with everybody. She dishes out such hits as “Turn It Well” and “Tadhana,” which perfectly showcase her sultry and deceptively powerful voice.

Following Up Dharma Down is the ’90s alternative band Nada Surf, pumping the air with bristling, sunny and guitar-heavy indie rock tunes that remind you a bit of Brian Wilson’s. A few diehards near the stage sing every word to the band’s set list that includes “Hi-Speed Soul” and “Popular,” but the rest of the young crowd seems indifferent.

Between acts, starving revelers take advantage of the 20 or so minutes that it takes the next band to set up onstage, to grab a quick bite or a drink. Your restless feet implore you to stroll and look around the sprawling venue. Amid numerous food carts, you take a peek at a stall selling vinyl records, where you see young nostalgists sifting through the modest collection on display—The Beatles, Roxy Music, etc.

You jostle through a sea of dancing people, carefully watching your every step to avoid squashing wayward slices of pizza. Every so often, you bump into a familiar face—Anne Curtis and boyfriend Erwan Heussaff, Andi Eigenmann, Maxene Magalona, Raymond Gutierrez, Gwen Zamora, Julia Barretto… 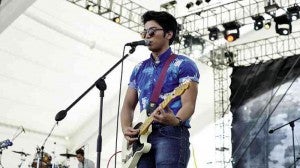 You walk over to the Gold area, and watch people on inflatable slides and Velcro walls having a blast. You inspect artwork installations by Anjo Bolarda x Martojaks, Secret Fresh and Thursday room.

Neon Trees takes the spotlight with “Moving in the Dark.”  Don’t let front man Tyler Glenn’s reed-thin frame fool you. This guy is a show man of boundless energy—jumping, prancing, pirouetting, much like Mick Jagger or Freddie Mercury, he struts across the stage on tippy toes as he treats the crowd to bouncy, glam, synth-rock ditties “Love and Affection,” “Sins of My Youth,” “Animal” and “Everybody Talks.”

You laugh out loud as Glenn tosses his shoe and splashes water over the unsuspecting crowd. You stand astonished as he takes the mic by its cord, spins it over his head as a cowboy would a lariat, and lets it wrap around his neck. You laugh some more as he attempts to crowd surf, but fails because the people in front are too weak to pass him around. 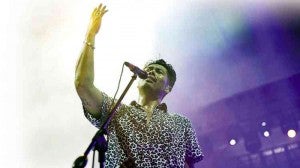 In front of you, a rowdy group sets shot glasses aside and starts drinking tequila from the bottle. You set off and find a stall that sells beer in plastic glasses for P100. The server fills half your cup with beer, the remaining half with ice. Begrudgingly, you hand him a crisp purple bill. You walk away, sit on the lawn, and chug your overpriced beer before it turns into a watery mess.

As you make your way back  to your area, you hear an eruption of screams and see people scurrying toward the stage. The Temper Trap, arguably the night’s most anticipated band, elicits ardent shrieking with “Love Lost,” which starts with streams of subtle beats and rhythms that eventually explodes into a chorus that uplifts and calms all at once. Front man Dougy Mandagi’s voice shifts from a delicate falsetto to an emotive, fuller midrange that sounds… almost pleading.

The Temper Trap marches on with the hits “Fader,” “Rabbit Hole” and “Trembling Hands”… a technical glitch mars “Science of Fear” midway, prompting the band to start over. You see the mishap as a chance to hear the song again. They prelude “Sweet Disposition” with a lengthy, atmospheric intro before Dougy caresses his way into the first verse. Suddenly, everyone is singing along.

A burst of confetti ends the music fest. You join the crowd—still singing—exiting the venue which, for about 11 hours, turned into a music wonderland.