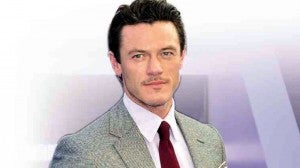 “EVERYONE in Wales sings, that’s probably why I have this affinity with Filipinos.” wenn/aceshowbiz.com

In a media gathering in Makati City on May 16, Evans announced he would be playing the lead character in the 2014 movie version of the 1897 Gothic horror novel by Bram Stoker. “I have a special diet because I’m training right now for ‘Dracula.’ I already have fangs! It’s bound to happen at some point,” quipped the 34-year-old actor. “I’m happy to say that I’m staying with the Universal [Pictures] family.”

Evans said he was disappointed his group could only stay briefly. The actor first came to Manila 10 years ago to stay with Filipino friends he met during the London run of the musical “Miss Saigon.”

During the red-carpet premiere of “Fast and Furious 6” at the SM Mall of Asia on May 15, Evans sang the popular love song “Kailangan Kita.” Here are excerpts from Inquirer Entertainment’s chat with Evans:

What do you love about the Philippines?

It’s such a beautiful place. I have a lot of friends here. Most of them came to the premiere—Ima Castro, Jake Macapagal, Miriam Marasigan and Jhong Hilario.

How do you regard Filipino talent?

There’s more talent per square centimeter in the Philippines than in any other country except Wales. Everyone in Wales sings, that’s probably why I have this affinity with Filipinos. We’re very similar. You have family dinners and, in five minutes, somebody would start singing or playing the guitar. It’s the same in my home in Wales.

Do you have to be a lover of cars to appreciate “Fast and Furious 6?”

You don’t have to be, although it helps. As much as the movie has fast cars, the story is separate from the cars. There is a very strong narrative running through the film. My character, for example, has a very strong theme in the movie. It also has a love story going on between Dominic Toretto (Diesel) and Letty Ortiz (Rodriguez).

Do you like driving cars? Do you own muscle cars?

I don’t mind them, but I don’t like to show off. I like cars that drive well. I drive an Audi. I used to have an Audi TT and then an R8, which is a very dangerous car to drive in London.

After playing heroes in your past movies, how’s it like to play a villain here?

It was actually very refreshing. I played a hero for a year in “The Hobbit: The Desolation of Smaug” so it’s quite nice to play the bad guy instead. It wasn’t the first time for me to be the villain, but I liked my character Owen Shaw because I felt that there were a lot of layers to him. There were a lot of interesting information that I was able to use to create this character. He has a military background. He’s also very clever, rich and quite young. He has access to a lot of machines and cars. I had lots of things to play on.

How was it working with Vin?

It’s quite weird because for 10 years or so, I’ve been watching him on screen and then all of a sudden I’m working with him. I remember feeling awed the first time I saw him. I said, “That’s Vin Diesel!” I couldn’t imagine actually having a scene with him.

In the film, Shaw says Toretto’s love for family is his weakness. Do you agree? How do you regard family?

I think my family is my strength, not my weakness. My family is the most important people in my life. I wouldn’t be where I am now if not for my family. I’m an only child. My mom and dad have sacrificed so many things for me. My dad is a bricklayer and my mom used to be a cleaner. I’ve always wanted to perform ever since I was a child. They’ve seen me progress, find my feet and succeed on my own. They’re very proud of me.

What for you was the most difficult part of the movie?

It was the physical stuff because it was just too intense. It carried on throughout the film. You are never really allowed to just relax. You always have to keep training. In fight sequences, you always have to be very accurate. If not, you can hurt someone. In fact, I chipped a tooth. It happened when Paul (Walker) and I were rehearsing a difficult scene because we were doing it in closed quarters. It was very easy to make a mistake. To keep up, I had a trainer and a stunt team to work with every day. I did as many stunts as I could.

What was your favorite part of the film?

The one with Vin and I meeting face-to-face. That’s the moment in the film when you realize that these two are equals but come from different sides of the fence. When they speak to each other, you can see that they have a certain level of respect for each other. The tank scene is also a favorite. We shot that for real. On a day, we have piles of flattened cars waiting to go to the scrap heap.

Do you have any favorite off-cam moments?

I think being in Tenerife (Canary Islands) was really fun. We shot a lot on the island while the weather was really beautiful. For four weeks, we got to live in a beautiful hotel. We didn’t work all day so it was like part-vacation and part-work.