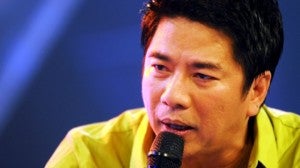 MANILA, Philippines—Following Willie Revillame’s announcement of retiring in October this year due to “personal” reasons, TV5 issued a statement on Tuesday wishing him well in “his new pursuits.”

“We respect the decision of Mr. Willie Revillame to retire upon the expiry of his contract with TV5,” said the Kapatid Network in an SMS sent to the INQUIRER on Tuesday early evening by Peachy Guioguio of TV5’s corporate communications department.

“We wish him well in his new pursuits,” the statement added.

The millionaire Revillame is the controversial host-producer of TV5’s noon-time show, “Wowowillie.”  He announced during Tuesday’s edition of the show he is about to retire in the middle of October this year.

Prior to his announcement, there has been news floating that TV5 is not renewing the contract of Revillame and his Will Productions.
Revillame said he was the one who requested TV5 management not to renew his contract because he needs a long vacation.