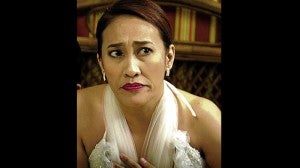 Comedienne  Ai-Ai de las Alas is planning to file for divorce from her husband of just over a month, Jed Salang.

Asked by “The Buzz” host Boy Abunda if she was filing for divorce, De las Alas said it was up to her lawyers to make whatever move was necessary. “They would be taking care of all the legalities,” she said.

De las Alas and Salang wed on April 3 in Las Vegas, Nevada, United States, after being together for more than a year.

A distraught De las Alas admitted on the television show last Sunday that she and her husband had been separated since May 2, one month after their wedding.

It was on the same show just five Sundays ago that De las Alas, looking like the happiest woman alive, talked about their Las Vegas wedding.

The 48-year-old actress said she was hoping to give Salang, who is 20 years younger, a baby. She also declared he would be the last man in her life. “I’ll take care of you… I will love you forever,” she vowed.

Walking down the aisle, De las Alas recalled, was like floating on air.

Her world came crashing down on May 2, when they were supposed to be celebrating the first month of their marriage.

She claimed Salang physically abused her, following her refusal to go to a hotel-casino to celebrate.

“I refused to go… because it was not healthy for us to be seen in such a place. I suggested that we should just stay in the house or go to a regular hotel. But he got mad,” De la Alas said. She said he pushed her toward the bed and was slapped. They wrestled but “when he dragged me across the floor, that was when I finally realized that I couldn’t take it anymore,” she said.

De las Alas revealed it was not the first time their fight got physical. “What else could he do to me? I gave him everything to make him happy,” she said, adding that she had gifted Salang his dream car, a Chevrolet Camaro, on the day of their last fight.

Having shared several happy moments in the one year and three months that they were together, De las Alas said she tried her best to look past  all the “ugly things” because she wanted to live a fairy tale and pretend everything was okay.

“I tried to show that we were happy because that was what I really wanted,” De las Alas said.

Declaring she genuinely loved her husband, De las Alas said the feeling had turned to anger and doubt since the “traumatizing” incident. “I just wanted to have someone to spend the rest of my life with, to have someone I could talk to and love me. And now I’m ashamed to say that things didn’t turn out the way I wanted them to.”

De las Alas said, three months into their relationship, she had already been warned by one of Salang’s friends who, out of pity, told her about the questionable intentions of her much-younger lover.

“I was told that Jed just wanted to make me fall for him and then do something else—I don’t want to say the word. Once he has done that, he’ll leave me for someone else—his ex-girlfriend,” she said. “I knew and felt that it was true from the start… But I was scared to admit it to myself.”

When asked if she thought Salang really loved her, De las Alas broke down and, in between sobs, said: “After everything I’ve learned [about him], I don’t think so. Kahit kailan ’di [niya ako minahal]!”