Arnel Pineda: Journey to go on a hiatus after 2016 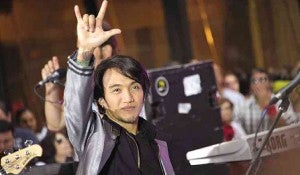 ARNEL says he sees himself living a simple life after his singing stint is over— having his own little farm and being a great cook. http://arnelpinedarocks.com

In our recent interview with Arnel Pineda, lead vocalist of the American band Journey since late 2007, he said that he and his band mates Neal Schon, Ross Valory, Deen Castronovo and Jonathan Cain might go on a hiatus after 2016. Whether the group would continue touring after the break, Arnel said was still uncertain. “It will depend on the demand,” he pointed out.

But Arnel didn’t look worried in the slightest. He knows that the opportunity of fronting an iconic rock band only comes once in a blue moon, and certainly doesn’t last forever. Once his stint is over, Arnel said he sees himself living a simple life—having his own little farm and being a great cook. And if a good opportunity comes along, “why not pursue a career in the Philippines?” he added.

But right now, Journey is busier than ever. After doing a couple of shows in Singapore, Japan, New Zealand and Australia earlier this year, Journey marched on a series of gigs in the United Kingdom and Germany, which started last May 16. Needless to say, Arnel is determined to savor every show and song onstage.

Excerpts from Inquirer’s interview with Arnel at his recent launch as the ambassador of Puregold’s “Tindahan ni Aling Puring” campaign:

How do you prepare yourself for touring?

I stay away from dairy products and oily food. My diet consists of fruits, vegetables and alternative sources of protein such as tofu. I try to avoid gaining weight as much as possible because it hinders my performance onstage. Touring demands so much energy.

I make sure to go to the gym, get enough sleep and have a complete voice rest. I only start talking an hour or two before a show.

We’re just doing shows this time. But we’re convincing our guitarist (Schon) to come up with a new album.

What’s the best part of being on tour?

Just being onstage and seeing people have a good time. It’s so incredible performing in front of 10,000-15,000 people singing along, and giving off great energy. And going to different places, you see different types of crowd and reception.

How about the worst part?

The downside is being away from my family. I get sad and depressed at times. I also hate it when I lose my voice.

How do you deal with your acid reflux?

There was a time when I had to cancel around five shows because I lost my voice due to acid reflux. Being with Journey, I get introduced to very good doctors and specialists. I’m managing the condition with proper medication.

Do you celebrate every successful show?

Yeah, we have wine or champagne. No more hard drinks though—I’m over those!

You were supposed to have a concert here last March 21. Why was it canceled?

It was because of sluggish ticket sales. And I think it was just wrong timing—kids were graduating and people were preparing for Holy Week. Hopefully we can do it in 2015 or earlier. This year and the next are already packed.

You mentioned that the band’s going on a hiatus after 2016? Will you resume touring after?

We’re going to finish our commitments with [entertainment company] Live Nation Entertainment… It depends if there’s still a demand for us to be up onstage. And if there’s clamor from fans for us to perform in different places, then we’ll go out.

What will you do during the band’s hiatus?

I’m working on a solo album. I already have 12 songs which I’ve recorded in my home studio. I’ll try to promote that.

How did you find the documentary “Don’t Stop Believin’: Everyman’s Journey”?

Well, medyo nandiri kasi ’di naman tayo artista.  Haha! They even showed me getting a massage. Nag-Coco Martin ako! But it was great! I believe it would inspire artists and musicians who are losing hope that they could succeed, and that miracles could happen. I actually want to turn it into a film.

So are you working on it right now?

I’m talking with investors at the moment. But I have a hard time finding an actor that has the same looks and height. Having a great voice is not really a must. I just want my story to be portrayed well.

You were also very open about your vices in the documentary—alcohol, drugs, etc.

Because I want people to see that these things can really negatively affect our lives. I want to tell all the dreamers out there that they should stay away from vices if they want to succeed; that they need training, guidance and support.

What have you learned from your band mates?

They’re so meticulous. I could say that I’m more disciplined than ever. They also helped me widen my perspective when it comes to songwriting.

You’ve been with the band for more than five years now? Do you believe that fans have fully embraced you as the vocalist?

It was hard in the beginning—with all the comparisons to Steve Perry. But like I’ve always said, I’m not trying to compete with him—I’m just trying to continue the legacy of the band. But now I can say that there are more fans now than critics.

What will you remember most when this journey eventually ends?

The whole experience itself—it was just kind of bizarre in a way. How could a simple guy like me sing for a band like Journey? It’s very rare for an artist born and raised in the Philippines to penetrate the international market. Being with the band was a big blessing and I’m grateful for it.