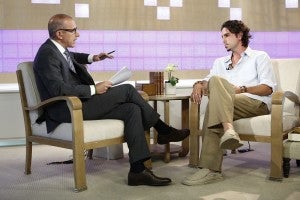 This image released by NBC shows co-host Matt Lauer speaking with choreographer Wade Robson during an interview Thursday, May 16, 2013, on the “Today” show in New York. Robson, who testified that Michael Jackson never abused him as a child, has now filed a claim against the singer’s estate claiming years of abuse by the pop superstar. AP PHOTO/NBC, PETER KRAMER

LOS ANGELES—An Australian choreographer alleged Thursday that Michael Jackson sexually abused him for seven years as a child, a claim the late singer’s estate described as “outrageous and sad.”

Wade Robson—who testified at Jackson’s infamous 2005 molestation trial that the star never touched him—told a TV interviewer that the self-styled King of Pop was a “pedophile and a child sexual abuser.”

“He sexually abused me from 7 years old until 14 .. . He performed sexual acts on me and forced me to perform sexual acts on him,” the 30-year-old former dancer told NBC’s the Today show.

The allegations surfaced last week, when it was reported that Robson had filed a lawsuit in Los Angeles on May 1 claiming “childhood sexual abuse” by Jackson, who died in 2009 aged 50.

The legal documents were sealed, shielding details of the allegations, although Robson’s lawyer Henry Gradstein issued a statement saying: “Michael Jackson was a monster and in their hearts every normal person knows it.”

The ex-dancer had a breakdown last year, according to the attorney. “He collapsed under the stress and sexual trauma of what had happened to him for seven years as a child,” he said.

On Thursday Robson took to morning television to explain to the Today show’s Matt Lauer why he was coming out with allegations which directly contradict his under-oath testimony at the 2005 trial.

“This is not a case of repressed memory… I never forgot one moment of what Michael did to me. But I was psychologically and emotionally completely unable and unwilling to understand that it was sexual abuse,” he said.

“From 7 years old, from day one of the abuse, Michael told me that we loved each other and that this was love, that this was an expression of our love. And then he’d follow that up with, you know, ‘But if you ever tell anyone what we’re doing, both of our lives and our careers will be,’” he said.

He alleged that Jackson trained him with role-playing on the phone before his 2005 court testimony, in what he said amounted to “brainwashing”—but denied being paid to say the things he said.

“It wasn’t any sense of the truth on the phone. He would role play with me and train me for these scenarios.”

Howard Weitzman, lawyer for Michael Jackson’s estate, noted in a statement that Robson “has adamantly denied under oath and in numerous interviews over the past 20 years that Michael Jackson ever did anything inappropriate to him.

“He now wants us to believe that he committed perjury at least twice and has been lying to anyone and everyone about Mr. Jackson since the early ’90s so he can file a claim for money.

Jackson, dogged for years by child molestation charges, was acquitted after the high-profile trial in 2005. But his career never recovered, and he died four years ago while rehearsing for a doomed comeback tour.

The singer’s mother, Katherine, is currently suing AEG Live, the promoters of his would-be tour, for negligently hiring doctor Conrad Murray, convicted over the star’s death from an overdose of the anesthetic propofol.