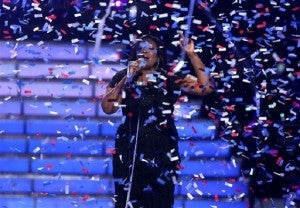 Candice Glover performs on stage after she was announced the winner at the “American Idol” finale at the Nokia Theatre at L.A. Live on Thursday, May 16, 2013, in Los Angeles. (Photo by Matt Sayles/Invision/AP)

“Three times,” exclaimed a weepy Glover, referencing the trio of times it took before she made it to the finals of the Fox singing competition.

After her coronation, an emotional Glover sobbed her way through her new single “I Am Beautiful.”

Jackson has served as a judge on all 12 seasons of “Idol.” He first appeared on the panel alongside Simon Cowell and Paula Abdul when the competition debuted in 2002, becoming famous for his easygoing “yo, dawg” rapport with contestants.

“I love everybody that walked on this show,” Jackson said. He added, “Hopefully, I touched their lives a little bit. They certainly touched mine.”