Thia would ‘love’ to meet Pacman, Aga in Manila 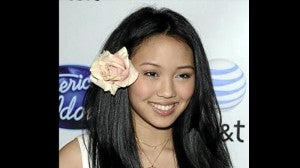 Fil-American singer Thia Megia is excited about her visit to the country with other “American Idol” finalists next month.

She asked followers on Twitter: “With the concert in Manila coming up, what are your recommendations as to [which places] to visit when we’re out there?”

She said she was likewise a fan of Regine Velasquez and earlier Filipino AI finalist Jasmine Trias.

Thia said halo-halo is one of her favorite Pinoy desserts. According to online reports, she loves the dishes adobo, sinigang and pancit as well.

She said that she, her mom and her ate (big sister) plan to go on an Asian tour after the Philippines.

Earlier she posted that the “Idols” concert tour had reached the half-way point: “24 shows down, 24 more to go… it’s been such an amazing journey. I love my fellow Idols, tour crew and the awesome fans!”

At 16, Thialorei Lising Megia is the youngest so far to make it in the reality show’s Top 13. Once an early favorite, she was eliminated with Namia Adedap in the show’s fourth week.

Her parents are originally from Angeles, Pampanga and changed their surname from Mejia to Megia when they moved to the United States in 1968. Bayani San Diego Jr.

The Cultural Center of the Philippines presents “The Story of Jazz: 1st CCP International Jazz Festival” on Aug. 23-28.

There will also be lectures and workshops; a video documentary on the story of jazz in the Philippines produced by Richie Quirino and Collis Davis Jr.

Martin Nievera performs in “Tribute,” his two-part concert series, on September 2 at the Newport Performing Arts Theater, Resorts World Manila. The show celebrates the music and songs that have influenced Nievera for the past 29 years of his singing career. Special guest is Robin Nievera. Marvin Querido directs. Call 8919999 or 6877236.