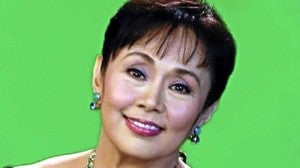 “Risk-taking movies,” Santos described her films with Regal – “Relasyon,” “Broken Marriage” and “Sister Stella L” – which won her best actress trophies from the local critics’ Urian three years in a row, 1982 to 1984.

In the 1980s they made movies that defied commercial considerations, she recalled, much in the same way that today’s independent filmmakers are “daring and different.”

After turning down Raya Martin’s “Independencia” (the role went to Tetchie Agbayani) two years ago, Santos almost did an indie this year – Adolfo Alix Jr.’s “Isda.” The role of a slum dweller who gives birth to a fish went to Cherry Pie Picache.

Santos’ schedule didn’t allow her to accept the offer, but talks are ongoing with Alix. “I heard Adolf is working with scriptwriter Lualhati Bautista on another project,” she told the Philippine Daily Inquirer.

Santos said she closely follows the progress of indie filmmakers. “I ask my staff to buy DVDs of indie films, which I watch in my free time.” Among her favorites are Jeffrey Jeturian’s “Kubrador” and Brillante Mendoza’s “Lola.”

But before she could go indie, Santos has to honor her commitment with mainstream company Star Cinema. Her big-screen comeback will cast her opposite Kim Chiu, under the direction of Chito Roño. “I had to ask permission from my province mates if I could do a film this year,” she said.

She has other dream projects in the works. “I have another movie planned with Sharon Cuneta. I’m sure it will push through.”

Another is a film on the life of another nun – Lipa visionary Sister Teresita Castillo.

“I’ve met Sister Teresing. Her story would make a wonderful film,” Santos said. “It could become controversial because until now the raining of rose petals in Lipa (Batangas) has yet to be considered a miracle.”