What mom Susan would do for Grace 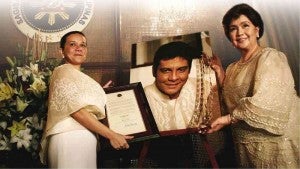 Actress Susan Roces felt “too traumatized” by her experiences while campaigning in 2004 for her late husband and then presidential candidate Fernando Poe Jr. that it “took her forever to throw her full support” to her own daughter Mary Grace Poe’s senatorial campaign.

“Now, she’s okay with it. I just make sure to check on her—since she’s now 72— when she does her palengke tours. The weather these days is extremely hot,” said Mary Grace, former chair of the Movie and Television Review and Classification Board (MTRCB), during her recent visit to the Inquirer office in Makati City.

“I don’t stay overnight when I go to the provinces, but my mom does because she gets tired easily,” Mary Grace said. “My close-in security personnel, who got used to me always traveling light, were surprised with all of my mom’s check-in baggage. When she went to Bacolod, she came home with boxes of the batuan fruit and a lot of cakes and pies from the popular place called Café Calea. In her other trips she bought marang, suha and even durian.”

Roces had been to Cagayan de Oro, Iloilo, Pangasinan and Cebu, Mary Grace reported. “I remember when she came home from General Santos City, she said, “’di na nga ako nakapagdala ng tuna,’ as if it was my fault,” she recalled.

Mary Grace said her half-sibling, actress Lovi Poe, had also volunteered to join her campaign. “I’ve been very careful about asking her to campaign for me,” she said. (Lovi is Poe’s daughter with former model Rowena Moran. They have a brother, Ronian, whose mom is former actress Anna Marin.)

Lovi’s contribution to her sister’s campaign had so far been her entries on her Twitter account, which now has over 600,000 followers.

“From time to time, she’ll tweet ‘I support you Ate.’ I’m touched by her gesture,” she said.

“I’ve been very careful about sending her campaign materials because people around her might say that all of a sudden I’m trying to make friends with her just because I’m running for public office.”

Instead of Lovi, Mary Grace had tapped celebrity couple Zoren Legazpi and Carmina Villarroel to appear in a series of campaign ads.

Mary Grace admitted she was already exploring the possibility of running for a government post as early as 2010, but her mom discouraged her, citing her lack of experience in public service. “I guess she thought no one would consider appointing me unless I actually apply for a position in government,” Mary Grace explained. “That’s why when President Aquino offered the MTRCB post, mom was the happiest because it involved an industry that she’s familiar with.”

Mary Grace claimed to be “very familiar” with the entertainment industry “even though I was just in the background.” She recalled that instead of bedtime stories, her late father read screenplays to her. “I already knew which character would die at certain points in a story long before everyone else.”

She added: “My father was a writer. He would watch, let’s say, a news program on CNN, and then if he heard a Palestinian activist say something in English that he liked, he’d then write this down and ask my mom to translate in Filipino. This will then be included in my dad’s movie lines. His films were based on real-life experiences.”

Mary Grace said she was well aware that some people look down on her political credentials. “Some say the MTRCB is not even a major government agency. Just think about what we’re trying to balance in the MTRCB: Freedom of expression and creative freedom, and then on the other side is protecting the value system of our children, protecting the rights of the parents to protect their children. It’s very precarious. You always have to weigh things.”

Mary Grace disclosed her plans to help improve the sad state of the industry in case elected, including the organized exportation of TV shows and movies. Another issue of interest to her is the lack of funding for government-run establishments like the Cultural Center of the Philippines.

Mary Grace took up government and political theory at the Boston College in Massachusetts. Married to Neil Llamanzares, the couple has three kids—Brian, Hanna, Nika. She spent much of her adult life in the United States before returning to Manila in 2004, when her father passed away.

“Although I’m very proud to be my parents’ child, there was also a certain pressure to it. I’ve always had to deal with people’s high expectations,” she said. “I came home because mom was already all alone. She detested politics.”

Mary Grace said her husband never resented her decision to drop the surname Llamanzares since Poe was more recognizable to people.

Does she think she’d win if she weren’t Poe’s daughter? “I guess not. My relationship to him opened many doors for me,” she admitted. “One thing my parents have given me is the chance to be heard. Both of them always listened to my ideas.”