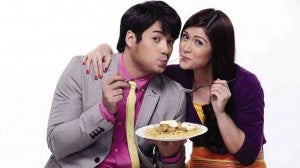 CARLA Abellana says Geoff was sad but not shocked to receive memo from the bosses.

“It was bound to happen. It was not a shock to him at all,” said actress Carla Abellana on her boyfriend Geoff Eigenmann being ordered by his bosses in GMA 7 to lose weight.

Carla said Geoff “felt a little sad” when he got the memo, but “he knew it was his fault. Geoff is a foodie.”

A show biz insider was quoted by an online report as saying that network bosses were left with no choice but to serve the memo to Geoff, whose weight gain had been obvious on his recently concluded drama series “Forever.”

Geoff’s manager, Perry Lansigan, said the actor was willing to “cooperate” but could not say what slimming regimen the actor would take.

“He has asked at least two weeks to work out at the gym and come up with a diet plan that’s best for him. He was used to eating only steamed meat, but he wasn’t consistent. He lacked discipline,” Carla told the Philippine Daily Inquirer. “I would always tell him to stick to his diet, even though he hated being reminded.”

Carla promised to support Geoff in whatever way she could.

She said: “I’d join him in his diet if need be. I was happy when he decided to go biking one time. I encouraged him to do it. I always try to motivate him.”

The actress said she had always been mindful of her food intake. “I don’t restrict myself. I just try as much as possible to eat the right food in the right amount.”

Carla is busy preparing for her newest drama series on GMA 7, titled “My Husband’s Lover,” which will start airing in June. She plays Lally, wife to Dennis Trillo’s character Vincent.

“Their beautiful relationship turned sour in time. At first, Lally suspected that her husband was cheating on her. When she decides to investigate, she discovers that he is gay,” the actress said.

Carla said she was aware of the program’s highly controversial subject matter and was pleased with GMA 7’s decision to tackle it on the small screen. “I believe that the audience is ready for something like this. It’s truthful and timely.”

The actress, who was supposed to play lead in the fantasy series, “Mrs. Snow White,” said she was saddened when the Kapuso network had opted to postpone the project.

She said the show was supposed to air last March. However, the members of its production team only started working on it in January, she added.

“They needed more time to prepare for it,” Carla pointed out. “They also needed to order a body suit for me from the United States.”