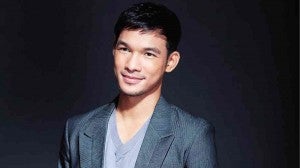 BAUTISTA. Marks his 10th year with a new album, a stage play and a concert.

Mark Bautista has gone a long way since he got on a cargo ship to try his luck on “Star For A Night.” In celebration of his 10th year in show biz, the chinky-eyed balladeer from Cagayan de Oro has been tapped to wax “The Sound of Love,” which he says is his dream album.

Mark shares that his fondness for old songs with simple but meaningful lyrics began when he was a kid, so he makes it a point to include a number of them in his repertoire. The release of his latest recording coincides with the presentation of “The Full Monty,” his latest foray into musical theater.

The recording’s choice cuts include Mark’s covers of “Bato Sa Buhangin” by Ernani Cuenco and Snaffu Rigor, “Love Without Time” by Willy Cruz, and “Kailangan Kita” by George Canseco, as well as popular standards like “When I Fall In Love,” “Strangers in the Night,” “What A Wonderful World” and “Love Story.” Some of them will be featured in his “Sound of Love” concert at Music Museum on June 29.