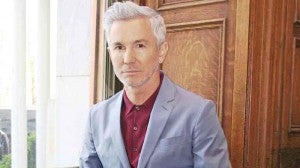 LUHRMANN. Career-making call paved the way for his success as a filmmaker. Photo by Ruben V. Nepales

LOS ANGELES—Taking a break from preparing his latest production, “The Great Gatsby,” which opens the 66th Cannes Film Festival this Wednesday, May 15, director Baz Luhrmann sat down with us to look back at his relationship with the famed fest on the Croisette.

It started 21 years ago. “I made a little film called ‘Strictly Ballroom,’” began the silver-haired Australian director as he sat in the Oak Room of New York’s The Plaza Hotel, which was frequented by “Gatsby” author, F. Scott Fitzgerald, and his wife, Zelda, in the 1920s. “It was my first movie ever,” he said of “Strictly Ballroom,” which he originally created as a one-act theater piece, about the world of competitive dancing, and went on to become a film entered in Cannes’ Un Certain Regard in 1992.

“I had one distributor in Australia,” Baz said of the film that starred Paul Mercurio as a maverick dancer. “We had one cinema, and the distributor saw the movie. He left at the end of it, saying, ‘Not only is it the worst film I’ve ever seen, but you’ve also ruined the career of Pat Thomson.’ She played the mother. Pat died without ever knowing that she won the AFI (Australian Film Institute) award for Best Supporting Actress that year.”

Baz added, “At that moment, CM (that’s how he calls his wife, Catherine Martin, an Oscar-winning art director and costume designer), a young designer friend of ours, and I went up the coast. We stayed in a trailer park. There were so many coconuts falling that you had to wear a bucket on your head, so you don’t get killed by them. I have a bucket on my head, and my career is dead. This woman said, ‘There’s some guy from France on the phone for you.’ Back in those days, phones were connected to the wall. So, I get on the phone.”

That career-making call came from a man who also advocated for other filmmakers, including the late great Lino Brocka, Hou Hsiao-Hsien and Jane Campion, to be recognized in Cannes: Pierre Rissient. Baz said, “This guy goes (in mock French accent), ‘My name is Pierre Rissient. I am from the Cannes Film Festival. I’m going to make an offer for you to do a special screening in Cannes. But, you only have a day to decide.’ I remember going, ‘Mr. Rissient, just give me a minute,’ and I put the phone down. Then, I picked up the phone and went, ‘I think I’ll be OK with that.’”

“So, I go to Cannes and screen the film,” Baz continued. “We were only half a houseful at midnight. At the end of it, it was a crush, and a security guard leaned over, grabbed me, and said, ‘Monsieur, your life will never be the same again.’ They called for another screening the next night, and there was a riot of people trying to get in.”

Baz went back to Cannes in 2001 when “Moulin Rouge” opened what many regard is the world’s most prestigious film fest. With a smile, Baz said, “‘Moulin Rouge’ was just a crazy blur of circus. Nicole broke protocol, went over (to the fans), and signed autographs. She’s Nicole Kidman, you know.”

“Now, I’m returning,” Baz declared. “I have children now. We usually stay at this old hotel not far from Toulon. Fitzgerald wrote the novel not far from there. I’m looking forward to going back, and my children being with our French family, and just peering over and hearing all the noise. Cannes has always been majestic to us. It means so much to us. It wasn’t easy. There were a lot of great films being considered for the opening night. Thierry (Fremaux, Cannes’ artistic director) takes nothing lightly. When he rang and said, ‘You’re the opening,’ it was really cool!”

Baz brought up the irony in his cinematic take of Fitzgerald opening in Cannes. “I know that when Fitzgerald was dying, he went to bookshops and bought copies of his own book, so that he had some sales, because it was very much forgotten, and no one cared,” he pointed out. “‘The Great Gatsby’ recently became the No. 1 selling book in America on Amazon. He will have sold more copies of that book in the last week than he sold in his entire lifetime. I think, ‘How about that?’”

He said, “I also feel happy that 20 miles from where he was writing the book and his wife was having an affair, St. Raphael, the film version of the book will be in Cannes. He wrote a lot of the book just outside Cannes. Now, 88 years later, that book’s movie version is opening the Cannes Film Festival—and in 3D.”

The director, whose credits include “Romeo + Juliet” and “Australia,” narrated how he cast “The Great Gatsby.” “I never thought about anyone else but Leonardo (DiCaprio),” he revealed. “It was always going to be Leonardo. But, in the search for Daisy Buchanan, it was like a ‘Gone with the Wind’ search. Every actor you can imagine wanted the role. Every actor came in. Leonardo relentlessly worked with me. He and Tobey Maguire have been partners in the creation of this movie. Leonardo worked with every actor who came in.”

Baz shared what he described was one of those unforgettable moments. “Carey (Mulligan) came in, and within 10 seconds, we knew. I almost tried to push her out of the door quickly, because I was desperate to go to Leo and say, ‘Did you see what I saw?’ He said, ‘I guess we just saw the next phenomenon in acting.’

The search for the actor to play Tom Buchanan was also just as dramatic: “Joel Edgerton isn’t in my movie, because he’s my countryman,” Baz stressed. “Again, everybody wanted that role.

“Then, Joel auditioned. He was Tom Buchanan from the moment he walked in. Fitzgerald wrote that Buchanan was probably the best character he ever drew—and Joel nails that character!”