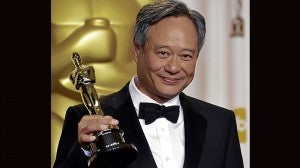 TAIPEI — Oscar-winning Taiwanese-American director Ang Lee said Thursday he is excited to be working on his first TV project “Tyrant,” but dismissed reports he would stay away from movies to focus on television.

“‘Tyrant’ is Middle East intrigue. The subject matter is touchy and pretty scary. I like scary, to scare myself… I am very excited about this project,” Lee told a press conference.

“I am still choosing my next (film) project and developing the next one. Of course movie is my first love,” he said, during his first trip to Taiwan since winning his second Oscar for best director with “Life of Pi.”

“Tyrant,” which is produced by the US cable TV channel FX, centers on “an unassuming American family drawn into the workings of a turbulent Middle East nation,” according to Hollywood Reporter.

Almost all of Lee’s films have drawn on both Western and Asian culture to depict characters struggling to fit into society, and to live up to the pressures of family and repressive social expectations.

Lee said he has to be “really diligent” in adapting cultures.

“As a non-American filmmaker I cannot assume that I know… I have to be modest and diligent adapting all kinds of cultures,” he said.

The filmmaker, who is based in New York, was hailed as the “glory of Taiwan” after becoming the first Asian to win a best director Oscar for “Brokeback Mountain” in 2007.

Lee is a big supporter of Taiwan’s film industry.

But he said he would not be able to chair the judging committee for the island’s Golden Horse film festival in November, since he needs to wrap up production of “Tyrant” at that time.