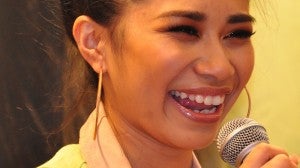 NEW YORK—Scoot over, Sunshine Corazon. Frida Romero is the new “frenemy” in “Glee” as Jessica Sanchez steps into the TV series as the lead singer for a rival glee club.

Charice Pempengco played visiting foreign student Sunshine Corazon for one season. That character has since been written off.

“I’m (supposed to be) a student of Indiana High School, and I’m with Hoosierdaddies and I’m in the regional competitions,” Jessica told The FilAm in an exclusive interview at Lake Grove on Long Island where the

A Fox publicist further explained how in the episode, a rag-tag group of glee club hopefuls heads to Regionals where the William McKinley High School’s New Directions glee club faces some stiff competition from the Hoosierdaddies, led by the small yet mighty Romero.

“So much fun,” she said. “I met Naya Rivera and all the rest of the cast, they’re so amazing, so nice.”

After finishing second to Phillip Phillips in last season’s “Idol” competition, Jessica’s career has been soaring.

Only 17, this Filipina-Mexican-American sang the “Star Spangled Banner” at a White House event last month, with the Obama family no less by her side.

Just recently, she signed a coveted contract for a guest-starring role as Frida Romero for the fourth season of “Glee,” which airs May 9. The role requires powerful vocals as Jessica pits pipes with the lead singer from New Directions.

Her new album, “Me, You and the Music,” was released April 30. One of the cuts is a duet with Grammy Award-winning R&B artist Ne-Yo.

While her career seems to be shooting to the top, her personal life has suffered a setback.

Jessica revealed she and boyfriend DeAndre Brackensick are no longer together. DeAndre was another “Idol” contestant but did not go far.

“I didn’t write any song,” she said referencing Taylor Swift who is noted for penning songs about an ex and a breakup. DeAndre and Jessica became sweethearts on July 19, 2012.

“It’s whatever. Nothing big. Nothing bad. So no songs dedicated to him,” she continued, smiling that sweet toothy smile that won the country over to this petite and pretty blend of Asian and Latina talent.

Of the ten songs in the debut album, her personal favorite is “Right to Fall,” dedicated to the LGBT’s struggle for marriage equality.

“I’m really really proud of her, this is so unexpected,” said Jessica’s mother Editha. “I didn’t realize she’s gonna be this busy, I didn’t know it’s gonna come this fast. It’s so surreal. So, we’re just taking it day by day.”

Jessica is coming back to New York to perform with fellow Latino Enrique Iglesias on Times Square. This is a production of the Spanish language TV network, Univision.

“My daughter is a hard worker,” Editha said. “She’s opening up for Enrique on May 14. This is not her first time, she’s done it before. When she was 14, she opened for Enrique in L.A.”

At the album launch, Jessica sang two songs from the album and gamely signed CDs for her fans. She also posed for pictures with them one at a time.

The event was sponsored by FYE at Smith Haven Mall on Lake Grove. About 200 people came. The manager said the event was Jessica’s gift to her fans on Long Island.

Wilbert Cipriano, an avid fan, said his favorite song in the album is “Crazy Glue,” composed by an 11-year-old girl by the name of Heather Russell. This Woodside, Queens butler said the song featured Jessica’s eclectic vocals a la Mariah Carey’s.

“I had so much support from the Filipino crowd and the Latin crowd,” Jessica has said in an AP interview. “Going to the Philippines was insane. I am like J. Lo over there!”