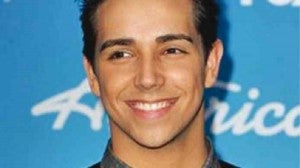 ARBOS. There are limits even to sympathizers’ “blind” loyalty.

We spoke too soon! Right after we wrote about Lazaro Arbos being the last guy standing on “American Idol” this season, the stutterer who’s now famous for “miraculously” licking his speech impediment the minute he opens his mouth to sing, was suddenly voted out of the popular singing tilt!

The egg we ended up with all over our abashed face was obviously laid by an ostrich!

Sorry about that, chiefs, but the territory that “AI” finds itself maneuvering through this season is so different that the usual rules and expectations no longer apply!

Initially, when Arbos became the last male survivor on the show, we thought that his huge swell of “sympathy” votes would hold him in good stead right up to the final-finals. Well, we were dead wrong:

It’s now clear that Lazaro’s fans weren’t prepared to keep voting for him despite his lackluster performances, just because their hearts went out to him.

There are limits even to sympathizers’ “blind” loyalty, and this was proven when Lazaro lost out to Amber.

So, for what could be the first time in “AI’s” history, there’s no male contender fighting for the crown in the tilt’s “final-finals,” which are won, more often than not, by male finalists.

This used to stand to reason, because the show’s target audience is young female fans, who naturally prefer cute, male winners.

Well, all that has been thrown out with the bathwater and the baby this season, with its all-female lineup of surviving finalists!

Why the big reversal in the way that the tilt usually “works”? Perhaps the guys just weren’t all that good this year, the super-sympathetic and empathetic Lazaro included.

In his case, viewer-voters possibly simply got fed up with his bland performances, and he may have eventually turned them off with his smugness.

Is this the end of the road for Lazaro? On “AI,” yes—but, there are other prospects out there. If he’s savvy rather than smug, he can still get a stellar singing career going.

For one thing, he can position himself as an inspiring role model for other differently abled people, whose numbers run in the millions.—And, his being Latino opens up another huge audience and market that he can tap into.

What about the remaining contenders on “AI”? Although she shared the cellar position with Lazaro, our bet for ultimate winner is still Amber, because she’s young, beautiful, dusky, has charisma and stellar glow, and is clearly destined to be a major find (move over, Beyoncé)!

Other female finalists may be more technically amazing, but it’s Amber who’s got the whole, hot enchilada—the entire stellar package.

Of course, we could be proven wrong again—but, we’re prepared to lump it and love it, as long as we keep learning lessons about “AI’s” astoundingly evolving singer-voter politics and dynamics!