Winona Ryder on shoplifting case, role in ‘The Iceman’ 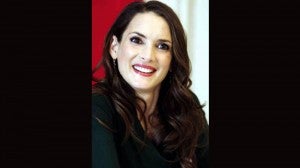 WINONA Ryder: “Home to what really matters in my heart.” photo: Ruben Nepales

LOS ANGELES—“I am not a person who can sit around and [wallow in] regret because everything that you do, every bad experience… that you have, there is, weirdly, something good that comes from it,” Winona Ryder said in our first interview with her after many years. Sitting in a meeting room at New York’s Waldorf Astoria Hotel, the actress was answering a question regarding her thoughts in retrospect about her shoplifting incident in Beverly Hills’ Saks Fifth Avenue store in 2001.

Felony charges were filed in 2002 but were eventually reduced to misdemeanors. Winona moved back to the Bay Area where she grew up. “I needed to slow down because I was working quite a bit,” said Winona, lovely in a green dress but looking a bit nervous. This was one of her first press conferences since she began accepting film offers again in 2007. “I just needed to get some perspective. But I do feel like it was a really long time ago so it’s hard to think about. I don’t really have much to say that would be enlightening or anything.”

She continued: “Obviously, things were happening. It was just time for me to slow down and get back home. When I say home, I mean to what I care about, to what really matters in my heart. That required some time because I had worked since I was 12.”

Winona stars opposite the brilliant Michael Shannon in Ariel Vromen’s gripping “The Iceman,” based on the true story of contract killer Richard Kuklinski (played by Michael) who, by the time he was finally arrested in 1986, had killed more than 100 people. Winona portrays Kuklinski’s wife in the film that also stars Chris Evans, Ray Liotta, David Schwimmer, Stephen Dorff and, in a cameo, James Franco. 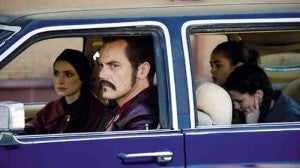 MICHAEL Shannon and Winona Ryder in “The Iceman.” It’s really his film, she says.

Having been caught in the eye of a media circus following the shoplifting incident, Winona was asked what advice she would give to new actresses on how to deal with press attention. She replied: “I am very impressed at how composed so many of these girls are, and talented, obviously. It was very different when I was growing up. I did quite a few movies before I ever did an interview at all. It was just very different.”

The actress added: “I am not one to usually give advice but with the Internet and instant access, I try not to engage so much in that because Googling yourself might be one of the worst things [you could do],” she added. “I did it once. There’s so much good that can come from the Internet but it’s one of those things where the good is great but the bad is really scary. If anything, I would say, maybe to stay away from that because you’re never going to win… With the Internet, a click can take you down a very slippery slope but then I know that there’s also a lot of wonderful aspects to it.”

On what she is looking forward to in her life, the child of counterculture writers Michael and Cynthia Horowitz who grew up around the likes of poets Allen Ginsberg and Lawrence Ferlinghetti said, “I feel like I’m always trying to go back to that John Lennon quote –‘Life is what happens to you while you’re busy making other plans.’ I am not saying that I don’t think about that sometimes. But I do feel that the best way to live is to try to be present even just like now, listening to your questions and being here. Not to sound like a complete hippie kid but being present, like this is happening right now. There’s so much that interests me.  (The)…other work that I do that doesn’t have anything to do with acting… I find so satisfying. If I were better at it, I could have maybe gotten the other career.”

Some of her other passions include working on Indian reservations to help preserve their indigenous culture and to keep bookstores alive.

“There were no books or anything,” she answered when asked if she had read any that nurtured her “being present in the moment” outlook. “My mom is Buddhist… or she practices Buddhism. I’ve always been aware of it. Over the years, I lost a little bit of that or I found myself missing it for various reasons. Maybe I was working too hard or I wasn’t giving myself enough time to be a normal girl. Maybe it’s something that happens when you get older, when you look back in your life. I can’t even begin to express how grateful I am to have had the life that I’ve had, even with its ups and downs. It’s important to keep yourself open, keep learning and being open-minded socially or politically. It’s something that happens hopefully as you get older—maybe not with everybody but it just happened to me. Living in the Bay Area helps. I have a lot of great people in my life who help me with that as well.”

Had she ever been blind-sided by someone close to her like the wife she portrays in “The Iceman,” who apparently was not aware of her husband’s contract-killer job? “Never to the extent of what’s explored in this film. But we all have been. I certainly have a lot of friends who have gone through some pretty intense stuff.”

She stressed: “This is really Michael’s film and rightfully so. He’s so brilliant in it. I tried to infuse a little bit of complexity like in the scene where we’re dancing and I say, ‘I found $30,000 in your wallet.’ That’s the kind of thing that would make anybody think, what’s going on? But I think she just didn’t want to acknowledge it because she liked her life the way it was. It was a level of denial that’s mind-boggling.”

(E-mail the columnist at rvnepales_5585 @yahoo.com. Follow him at http://twitter.com/nepalesruben.